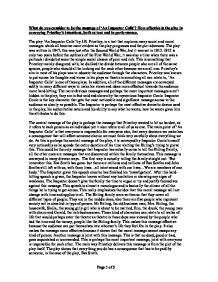 The message of an inspector calls

What do you consider to be the message of 'An Inspector Calls'? How effective is the play in conveying Priestley's intentions, both as text and in performance. The play 'An Inspector Calls' by J.B. Priestley, is a text that explores many social and moral messages which all become more evident as the play progresses and the plot advances. The play was written in 1947, this was just after the Second World War, but it was set in 1912. 1912 is only two years before the outbreak of the First World War; it was also a time when there was a particular divide between the simple social classes of poor and rich. This is something that Priestley mainly disagreed with; he disliked the divide between people who are all of the same species, people who should all be looking out for each other because we are all one. Priestley's aim in most of his plays was to educate the audience through the characters. Priestley was known to put across his thoughts and views in his plays as theatre is something all can relate to, 'An Inspector Calls' is one of those plays. In addition, all of the different messages are conveyed subtly in many different ways to make his views and ideas more effectual towards the audience more hard-hitting. The more obvious messages and perhaps the most important messages aren't hidden in the play; they are in fact said and shown by the mysterious Inspector Goole. Inspector Goole is the key character that gets the most noticeable and significant message across to the audience as clearly as possible. The Inspector is perhaps the most effective dramatic device used in the play, his authoritative nature and his ability to say what he wants, how he wants gives him the attributes to do this. The central message of the play is perhaps the message that Priestley wanted to hit us hardest, as it refers to each person as an individual yet it also refers to all of us as one. ...read more.

Birling has married to a higher class than himself. '[reproachfully] Arthur you're not supposed to say such things-' Here Mrs. Birling is correcting her husband for his lack of social decorum. She is saying that he shouldn't talk to slaves as they are help and not company. Mrs. Birling is a woman of her time and therefore is very aware of what is traditionally acceptable and what isn't. Priestly is trying to show that what Mrs. Birling is saying might seem as if she's correcting her husband but in doing this she is doing the wrong thing. Priestly is trying to ask 'Why shouldn't Arthur say such things?' after all, moralistically, everyone is equal. Even though she isn't out rightly saying that they are above the help in their home that is the impression she gives. On the other hand, Mr. Birling is very boastful in what he has achieved. 'You see, I was Lord Mayor here two years ago when Royalty visited us. And I've always been regarded as a sound useful party man.' He is here boosting his own confidence. He thinks himself a high class man and is therefore praising himself. This is sardonic as he believes he is a man who deserves a Knightship yet he deliberately dismissed someone from work for a petty reason. This is extremely effective because work is something everyone understands and knows, everyone realises that a little bit more money does help. A character like Mr. Birling would have been quite insulting to watch. This is another way Priestley conveys this by giving the family a high class presence literally but the fact of the matter is that they are low class when it comes to moral matters. Because this play is very realistic, another way Priestley communicates this message is by directly contradicting what the audience believes and knows. In this play Priestley is criticizing the British social system and of course those who are watching it will have the same views as the characters in the play. ...read more.

In the 1930's Priestley became more concerned with the social problems in Britain. The first book he reflected this in was 'The English Journey' in 1934; this was an account of his journeys through Britain. Priestley even made a socialist Common Wealth Party in 1941, their three main principles were common ownership, vital democracy and morality in politics. They really liked the idea of public ownership of land. All of these things allowed him to write a play like 'An Inspector Calls', not only was J.B. Priestly an author, he was an extreme socialist and he put these messages across in 'An Inspector calls' using a number of different methods. The methods he uses on the play as a whole is the actual timing. The play lasts as long as the time we watch it. This emphasizes the realism of it. It shows how the play really could be a snip of real life, like it isn't theatre but it's real life. Priestley has also not included any intervals perhaps showing that this is real, and it is happening and there is really no escape from it. That one can't take a break from the morality of the play and that it's definite. Overall, Priestley shows many moral messages in the play 'An Inspector calls', there isn't only one message. But it seems as if the message that he has made really obvious and that he expects everyone to go away with is everyone is responsible for each other. Priestley tries to put across his views in the play in many ways but one he wants everyone to get the message form the most is the Inspector. Only the Inspector portrays nearly every moral message and only the Inspector believes the message from the beginning of the play. Priestley is extremely talented and is truly "the voice of the common people" by looking out for them in his writing and out of it. ?? ?? ?? ?? Page 1 of 5 ...read more.