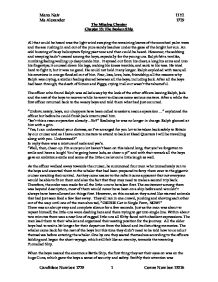 The Missing Chapter Chapter 13: The Broken Ship All that could be heard was the light wind swaying the remaining leaves of the scorched palm trees and the sea rushing in and out of the pure sandy beaches under the gaze of the bright hot sun. An odd buzzing of busy helicopters flying past now and then could be heard. However, the sobbing and weeping hadn't ceased among the boys, especially for the young uns. Ralph felt a terrible, numbing feeling welling up deep inside him. It spread out from his chest, along his arms and into his fingertips; it coursed down his legs, making his knees tremble, and sank to his toes. He tried hard to fight it, but it was no good. He could not hold it any longer. Ralph exploded with tears; all his emotions in one go flooded out of him. Fear, loss, love, hate, friendship; all the reasons why Ralph was crying, a similar feeling shared between all the boys, including Jack. After all the boys had been through; the death of Simon and Piggy, crying it all out wasn't that shameful. The officer who found Ralph was called away by the look of the other officers leaving Ralph, Jack and the rest of the boys to recover while he went to discuss some serious matters. ...read more.

My name is Admiral Walsh and I would like to welcome you all to my ship. Please accept my commiseration for your hardship, being marooned on the island. Also my condolences for the unfortunate deaths." Ralph looked down at his feet when the Admiral stated this, and in the corner of his eye he could also see a few of the other boys doing the same. The admiral went on to discuss the rules and regulations, where they would be sleeping and their journey ahead. After it had concluded a seaman lead them to their quarters. "Here you go, lads. You'll find new clothes on your bunks. Hope they fit coz they're all one size. Dinner's at 8.00pm you lot will be fed after all the men have had their food. Is anyone hungry right now?" "No", said most of the boys but a few little uns said, "Yes, please", and were called out to give them some spare food from the kitchens down below. Before the officer left, he made a small remark. "Hope you lot don't get sea sick", and chuckled away with the little uns following. It was just after evening when the boys came in after dinner. "That was great, haven't had a proper meal for ages", said Evan. ...read more.

Ralph woke up to find himself lying flat on the ground. He was lying down on sand and so was everyone was else. Except for the men who were busy rummaging through the endless objects scattered across the coast for miles on end. "Nothing! Nothing of use to us at all!" complained the man with a high degree of frustration. "Stranded on this Island for god knows how long" said the second man. Ralph began to stand when a group of men come out of the bushes behind him and shouted, "We've found our water supply and some food". It all came back to Ralph like a memory as if he'd been through this before. He wondered whether it was the same island or another one. He remembered the situation he was in before. The futile searches for human life on the island. Whatever Ralph thought he knew that he wasn't alone this time and that he had better chance of survival. "You there! Come over here" Ralph turned around to face the Man who was calling him. "Help me lift this up, boy." Ralph obeyed and walked towards the man telling himself it's all for the best, but with a feeling of extra wisdom having been through this before. End of Chapter 13 Manu Nair 11Y2 Ms Alexander 1729 Candidate Number: 1729 1 Centre Number: 13216 ...read more.