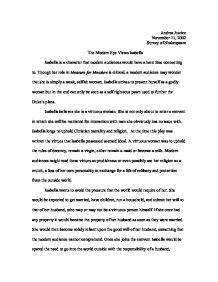 Andrea Justice November 11, 2002 Survey of Shakespeare The Modern Eye Views Isabella Isabella is a character that modern audiences would have a hard time connecting to. Though her role in Measure for Measure is critical, a modern audience may wonder that she is simply a weak, selfish woman. Isabella strives to present herself as a godly woman but in the end can only be seen as a self righteous pawn used to further the Duke's plans. Isabella believes she is a virtuous woman. She is not only about to enter a convent in which she will be restricted for interaction with men she obviously has no issue with. Isabella longs to uphold Christian morality and religion. At the time this play was written the virtues that Isabella possessed seemed ideal. A virtuous woman was to uphold the rules of decency, remain a virgin, either remain a maid or become a wife. Modern audiences might read these virtues as prudishness or even possibly see her religion as a crutch, a loss of her own personality in exchange for a life of celibacy and protection from the outside world. ...read more.

In the scene where the Duke is instructing her as to his plan for the bed trick, she says little other than to agree with him, submitting her will to his own, "I am directed by you" (Shakespeare 4.1. 137). There is no argument and no protest. Isabella is perfectly contented to become an actor or even a puppet, if you will, in the Duke's charade. Isabel Isabella's virginity is highly prized by her, and in the time she lived it was essential. A woman's worth would be judged by her blamelessness in regard to sexual matters. In modern society however virginity is not viewed in the same light. Modern audiences are desensitized to the idea of sexual matters. For a mainstream audience member to have had sexual relations outside of marriage, even more than once, is not uncommon. At the time she lived she would seem right in her decision to retain her virginity even though it meant her brothers life, as she says about it in 2.4 lines 105-108 "Better it were a brother died at once than that a sister, by redeeming him, should die forever" (Shakespeare). ...read more.

She, supposedly a virtuous woman, is supposed to become a nun to help others follow in the footsteps of Christ, is advocating that another woman commit a mortal sin so that her own brother Claudio may live. It could be argued that she is doing her duty as a nun would to a friar, but as a good Christian her conscious should tell her otherwise. To cause another to stumble in place of you is a sin in itself, and the strong woman of God would stand up to the Friar and refuse to participate in his scheme. Although Shakespeare's intent may not have been to create a frigid ice queen a modern eye cannot help but wonder that Isabella is a woman only able to stand on her own two feet with the proper crutch of religious dogma under one arm and self-righteousness under the other. Though she puts on the disguise of piousness, quite possibly it may be that her choice to join the convent may be less about a passionate desire to be Christ like and more about hiding the undeniable fact that she cannot function in her society on her own. ...read more.