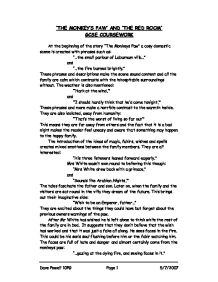 'THE MONKEY'S PAW' AND 'THE RED ROOM'

'THE MONKEY'S PAW' AND 'THE RED ROOM' GCSE COURSEWORK At the beginning of the story "The Monkeys Paw" a cosy domestic scene is created with phrases such as: "...the small parlour of Laburnum villa..." and "...the fire burned brightly." These phrases and descriptions make the scene sound content and all the family are calm which contrasts with the inhospitable surroundings without. The weather is also mentioned: "'Hark at the wind,'" and "'I should hardly think that he'd come tonight,'" These phrases and more make a horrible contrast to the warmth inside. They are also isolated, away from humanity: "'That's the worst of living so far out'" This means they are far away from others and the fact that it is a bad night makes the reader feel uneasy and aware that something may happen to the happy family. The introduction of the ideas of magic, fakirs, wishes and spells creates mixed emotions between the family members. They are all interested: "His three listeners leaned forward eagerly." Mrs White wasn't won round to believing this though: "Mrs White drew back with a grimace," and "Sounds like Arabian Nights,'" The tales fascinate the father and son. Later on, when the family and the visitors are sat round in the villa they dream of the future. This brings out their imaginative side: "Wish to be an Emperor, father..." They are excited about the things they could have but forget about the previous owners warnings of the paw. After Mr White has wished he is left alone to think while the rest of the family are in bed. ...read more.

Tension has been released by the disappearance of the son on the other side of the door: "A cold wind rushed up the staircase,..." and "...a long loud wail of disappointment and misery from his wife..." These phrases release the tension well as it denies the mans nightmares. The cold wind suggests that the thing at the door is leaving and rushes away, fast and cold. You get an image of Mrs White on the floor, hysterically crying for her son. You get an image of Mr White just standing, staring at where the thing should have been. And very, very relived. The Red Room is a short story similar to The Monkeys Paw. It is written in the same era and is a story of both tension and suspense. Unease is created effectively in the opening section. A scene of mystery and curiosity is produced as it begins with talk of ghosts and spooks that people have seen. It is created with phrases such as: "...never a ghost have I seen as yet." And "...the likes of this house." These phrases and descriptions make the scene sound full of apprehension and is unsettled. The old people in the other room also help to compose the edgy situation. Repetition helps to drum in the people's oddness: "...the man with the withered arm..." is repeated every time this character speaks. This makes him seem disabled or mauled. "...more bent, more wrinkled, more aged than the first...his lower lip half averted...his decaying yellow teeth." ...read more.

stumbled...fell...snatched...rose...thrust...turned...flung... screamed..." These verbs are in just three paragraphs, which in turn make the story sound dramatic and full of action. When reading it out aloud it also makes you talk faster because of the excitement created in this part. This creates the mood of panic and desperation for the man in the story. There are different lengths of sentences, especially towards the end where the action verbs are and after this: "I have a vague memory of battering myself thus, to and fro in the darkness, of a cramped struggle, and of my own wild crying as I darted to and fro, of a heavy blow at last upon my forehead, a horrible sensation of falling that lasted an age, of my last frantic effort to keep my footing, and then I remember no more." This sixty-four word long sentence will drain the reader of breath and make their heart beat faster which makes it more climatic. I thought that both authors were very successful in creating a short story, which created tension and suspense. Both stories were enthralling, engrossing and have both exciting and exhilarating plots. But I felt that although The Monkeys Paw was very much as exciting as The Red Room, it was let down by the disappearance of the thing knocking at the door. If the door of the villa was opened and the son or whatever was there was seen then the end could have been a lot more terrifying on the parent's behalf. The Red Room was mystifying with the candles mysteriously going out and what was attacking him at the end? Overall I generally preferred The Red Room because The Monkeys Paw had a poor ending. Dave Powell 10PG Page 1 5/7/2007 ...read more.