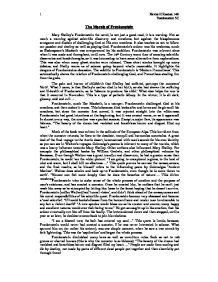 The Morals of Frankenstein

The Morals of Frankenstein Mary Shelley's Frankenstein the novel, is not just a good read, it is a warning. Not so much a warning against scientific discovery and creations, but against the blasphemous arrogance and disdain of challenging God at His own creations. It also teaches us not to follow our passion and destiny as well as playing God. Frankenstein's ardour was his weakness, much as Shakespeare's Macbeth was overpowered by his ambition. Frankenstein was relevant since when it was made and throughout, until now. The 19th Century was a time of amazing scientific discoveries and breakthroughs, so it was interesting to have some alternative from explanations. This was also when many ghost stories were released. These short stories brought up many debates, and Shelly warns us of science going beyond what's reasonable. It highlights the dangers of Frankensteins obsession. The subtitle to Frankenstein is 'Modern Prometheus'. This automatically shows the relation of Frankenstein challenging God, and Prometheus stealing fire from the gods. The pain and horror of childbirth that Shelley had suffered, portrays the monsters' 'birth'. What I mean, is that Shelley's mother died in her birth, so she had shown the suffering and ill-health of Frankenstein, as he 'labours to produce his child.' ...read more.

"I am a blasted tree; the bolt has entered my soul..." This quote is ironic, because, Frankenstein would never had created a monster, if he was never interested in science. What spurred him on, (or rather his ardour), was one simple moment, when he saw a tree struck by fork lightening. This was the 'captivation' and began the whole process. Frankenstein diminished many laws as well as unwritten rules. Such as not to rob graves or charnel houses (this is why the monster is so hideous). "The beauty of the dream had vanished and breathless horror and disgust filled my heart...." People are made from mating and die by destiny, not made by parts of different dead people put together and then electricity put through them! Frankenstein created two monsters in a sense, he physically created a super strong killing system that was turned away from society, and Frankenstein almost turned himself away from humanity. The peaceful wilderness is where the monster retreats to; nature is not his enemy, unlike humans. Every encounter with humans he has, they always seem to flee from him, or they beat him. This is until he stumbles across a poor family called the De Laceys. ...read more.

The monster's only real type of relationship was with his creator, Frankenstein, although he abandoned him at his birth. He describes him as a "daemoniacal corpse" and "my own vampyre." Frankenstein was an over reacher, and had finally realised what he had done. So he warns Walton not to follow in his footsteps. Satan in Milton's 'Paradise lost' is also an over reacher. This was another inspirational book for Shelley. This is one of many testimonials to Satan. The actual creation work is blasphemous and parallel to the pride of The Devil. Frankenstein and the monster both realise that they suffer worse misery than Satan himself does; they have no lives! As the monster says "Satan had his companions, fellow devils, to admire and encourage him, but I am solitary and abhorred...." We can see again how he is isolated again near the end, ".... The fallen angel becomes a malignant devil yet even that enemy of God and man had friends and associates in his desolation; I am alone...." He also realised that his life had taken a vast plunge from being privileged and having an almost perfect childhood, straight down, to having literally no family or friends, almost all through him. He caused the misery. He had potential and had taken his childhood for granted! 1 1 Xavier H Keenan 148 Frankenstein 5C ...read more.