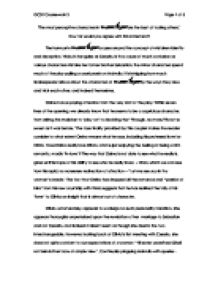 The most perceptive characters in Twelfth Night are the best at fooling others. How far would you agree with this statement?

'The most perceptive characters in Twelfth Night are the best at fooling others.' How far would you agree with this statement? The humour in Twelfth Night focuses around the concept of mistaken identity and deception. Viola, in her guise as Cesario, is the cause of much confusion as various characters mistake her for her brother Sebastian; the minor characters spend much of the play pulling a cruel prank on Malvolio. It is intriguing how much Shakespeare tells us about the characters of Twelfth Night by the ways they view and trick each other, and indeed themselves. Orsino has us paying attention from the very start of the play. Within seven lines of the opening, we already know that he seems to be a capricious character, from asking the musician to 'play on' to deciding that 'Enough, no more/'Tis not so sweet as it was before.' The faux finality provided by this couplet makes the reader consider to what extent Orsino means what he says, including his professed love for Olivia. Does Orsino really love Olivia, or is he just enjoying the feeling of being a rich romantic, madly "in love"? ...read more.

irritating habits - his continuing agreement (when Sir Toby declares to Maria, 'Shall I play my freedom at traytrip, and become thy bond-slave?', Andrew adds, 'I' faith, or I either?'). Maria and Toby have eloped by the end of the play, leaving Feste to reveal their pranking; they have understood what makes Malvolio and Sir Andrew tick and manipulated it to their own ends. Viola, arguably the primary protagonist of the play, appears to be remarkably more discerning than some of her cohorts. From early on, she begins moving freely between the two households of Orsino and Olivia, maintaining good relationships with each of them through her disguise of Cesario. She demonstrates a surprisingly ability to deal with the situations which she is presented with, providing the force which drives the play forwards. Unlike many of the other characters, she does not seems to have the same problems with love and romance that they do; she has an extremely pure love, born of passion: 'She pin'd in thought, And with a green and yellow melancholy She sat like Patience on a monument, Smiling at grief. Was not this love indeed? ...read more.

the start, while his link to destiny almost suggests to the audience that he knew the resolution of the play as well. In Twelfth Night deception is the mechanic of humour primarily due to the dramatic irony inherent. The characters are completely taken in by the web of trickery, yet we, as the audience, are not fooled for a second. However, the viewers must also appreciate that Twelfth Night does not go out of its way to be convincing, nor does this detract from the entertainment value of the play. A seventeenth century audience would be very familiar with the conventions of romantic comedy, more so than us watching the play today, but we do not throw our hands up and denounce the play for its lack of realism. Shakespeare pushes boundaries and makes it clear that this is not the real point behind the play, instead disguise ironically reveals the characters' personalities. I think that the more perceptive characters in Twelfth Night - Feste and Viola - are indeed better at playing the fool; they keep the network of disguise running, the network that Shakespeare has woven in is what makes Twelfth Night such a compelling play. ?? ?? ?? ?? GCSE Coursework 3 Page 1 of 4 ...read more.