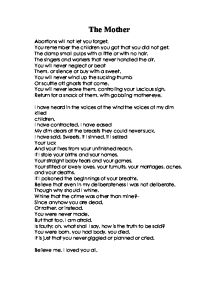 The Mother Abortions will not let you forget. You remember the children you got that you did not get, The damp small pulps with a little or with no hair, The singers and workers that never handled the air. You will never neglect or beat Them, or silence or buy with a sweet. You will never wind up the sucking-thumb Or scuttle off ghosts that come. You will never leave them, controlling your luscious sigh, Return for a snack of them, with gobbling mother-eye. I have heard in the voices of the wind the voices of my dim killed children. I have contracted. I have eased My dim dears at the breasts they could never suck. I have said, Sweets, if I sinned, if I seized Your luck And your lives from your unfinished reach, If I stole your births and your names, Your straight baby tears and your games, Your stilted or lovely loves, your tumults, your marriages, aches, and your deaths, If I poisoned the beginnings of your breaths, Believe that even in my deliberateness I was not deliberate. Though why should I whine, Whine that the crime was other than mine?-- Since anyhow you are dead. Or rather, or instead, You were never made. But that too, I am afraid, Is faulty: oh, what shall I say, how is the truth to be said? ...read more.

She stripped the child's life and this feeling cannot be forgotten by anyone. The poem is structured in a very unique manner, as in the first stanza, it is written as the mother is talking to herself. "Abortions will not let you forget." This makes it seem as if she is having an inner conflict with herself, proving that she might have had an abortion and feeling remorse for having it, losing the children she could have had, whereas the second stanza is written in the first person, which is unusual for a poem. In this stanza, she is confessing to her unborn child, of all the things that they lost. The pace is quicker in this stanza as enjambment is frequently used. This device also increases the effect of the dark tone, as her feelings flow more and are continuous. The poem is ambiguous as it may be about whether the mother is giving a painful assertion of guilt towards her lost child, or is emphasising the harmful effects of having an abortion in general. The poet has to be familiar to abortion to be able to express such raw emotions. When first looking at the title, we assume that this poem is about a mother and her boundless love for her children. ...read more.

She might have had more than one abortion. This raises the reader's curiosity as we want to know why she had them multiple times, but still is against abortions. The feeling of regret is the most powerful feeling among the many which the reader has. "If I stole your births and your names, Your straight baby tears and your games, Your stilted or lovely loves, your tumults, your marriages, aches, and your deaths." This sums up the regret as it shows the many things which were robbed of the children by the mother. Refrain is used to quicken the pace and show the many things taken away from them. With the use of these literary features, the reader, be male or female, is able to understand the pain which is felt by mothers who have lost their child. Brooks is attempting to magnify small things that babies do, into an irreplaceable feeling experienced by all mothers. This is a very controversial topic and Brooks is trying to convey this to all mothers, through the entire array of negative emotions throughout the poem, otherwise it will haunt them for the rest of their life. Brooks successfully showed that by having an abortion, you not only kill a child, but also a part of yourself as well. Maybe she had abortion as she didn't have cash to support one So she doesn't want it to suffer ...read more.