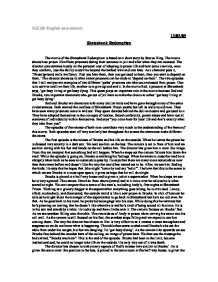 IGCSE English coursework 13/03/05 Shawshank Redemption The movie of the Shawshank Redemption is based on a short story by Steven King. The movie shows how prison life affects prisoners during their sentence in jail and after when they are released. The director concentrates mostly on the personal cost of adapting to prison life and how some convicts, once they conform, lose the ability to survive beyond the barbed wire and iron bars. As a character puts it, 'These [prison] walls are funny. First you hate them, then you get used to them, then you start to depend on them.' The director shows us to what extent prisoners can be made to 'depend on them'. The two episodes that I will analyse are examples of two different 'paths' prisoners can take once released from prison. One is to survive and live their life, another is to give up and end it. In the movie Red, a prisoner at Shawshank says, 'get busy living or get busy dying. This quote plays an important role in the movie because Red and Brooks, two important characters who get out of jail have to make the choice to either 'get busy living or get busy dying'. Red and Brooks are characters with many similar traits and have gone through many of the same circumstances. ...read more.

The way the director has chosen to film is very effective as it creates a tense atmosphere and suspense as we do not know what is happening. The table then starts to shake and Brooks kicks out the table from under his weight, his feet are dangling. He 'got busy dieing'. As the camera tilts upwards we see Brooks face behind the wooden bars of the ceiling, an image of prison bars. We then see the message he had carved, "Brooks was here". This is the end of the episode. Brooks had been to the limit, become institutionalised, he could no longer take life on the outside. His only way out of it was death. The director has chosen to make many aspects of Red's release very similar to Brooks'. He is given the same crow-like position in the bus, is placed in the same room at the half-way house, is given the same job at the supermarket. He also narrates this episode and tells us there is "no way I'll make it on the outside". We fear that he might take the same path as Brooks. As he's walking down the street he stops by a shop window. The camera focuses on two different things, a series of hand guns and a compass. ...read more.

Then the camera turns to a warm sunlit beach. The camera then pans and turns so we have a frontal view of Red. He is walking alongside the sea with his trousers rolled up and his shoes in his hands. The camera stops moving and we see Red coming closer and closer. The shot is then cut and a new shot views Andy further down the beach on a boat, scrubbing its surface. As he looks up he sees Red, he stands up and smiles, his eyes gleaming. He jumps down to greet Red. As the friends hug, the camera pulls back, revealing the wide, distant horizon of the blue Pacific with no end in sight. No longer are the Red and Andy confined by walls and iron bars nor watched on by guards. Both are free. Brooks had attained the limits at prison, he had become institutionalised and once released had found the only way out was death. Red, on the other hand, had hoped, and hope had led him to freedom, to happiness, to redemption. Through the themes and the cinematic decisions applied in these two episodes the director has made these vital to the understanding of the movie. He has given two examples of the extreme situations to which prisoners go depending on their emotions. One of the emotions is yet one of the main themes of the movie, hope, and in my opinion it has been brought up extremely effectively. Patricia Bandeira Vieira ...read more.