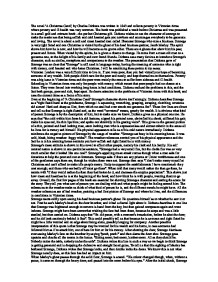 The novel 'A Christmas Carol', by Charles

The novel 'A Christmas Carol', by Charles Dickens was written in 1843 and reflects poverty in Victorian times where poverty and ill health was very common. The book was published a week before Christmas and was presented in a small gold and crimson book - the perfect Christmas gift. Dickens wishes to use the character of scrooge to make the reader see that being selfish and cold hearted gets you nowhere and encourages everybody to be generous and loving. The novel is about a cold and mean hearted man called Ebenezer Scrooge who runs a business. Scrooge is very tight fisted and one Christmas is visited by the ghost of his dead business partner, Jacob Marley. The spirit shows him how he is now, and how he will become as he grows older. There are 4 ghosts that show him his past, present and future. When visited by the spirits, he is given a chance to change. He turns from a mean old man to a generous one, to the delight of his family and new found friends. Dickens uses many devices to introduce Scrooge's character, such as similes, metaphors and comparisons to the weather. The presentation that Dickens gave of Scrooge was so clear that "Scrooge" is still used in language today, having the meaning of someone who is tight with money, cold hearted and who hates Christmas. I will be examining these points in my essay. Victorian London was a very difficult time to live in. If you were poor, then you had virtually no hope of becoming someone of any wealth. Rich people didn't care for the poor and needy, and kept themselves to themselves. Poverty was a big issue in Victorian times and the poor were mainly the ones to suffer from sickness and ill health. Schooling in Victorian times was only for people with money, which meant that poor people had no chance at a future. ...read more.

All the adjectives he uses are harsh sounding and they make him appear cold. Dickens refers to scrooge very often as being cold, 'External heat and cold had no influence on Scrooge', 'No warmth could warm, nor wintry weather chill him'. Everything about Scrooge is miserable. His name is onomatopoeic, when one says it, it sounds harsh and it does not exactly flow out of your mouth, it is hard to say. He is said to be 'Dark' 'They were a gloomy suite of rooms, in a lowering pile of building up a yard' His house was even described as gloomy. 'Half a dozen gas-lamps out of the street wouldn't have lighted the entry too well'. 'Darkness is cheap, and Scrooge liked it'. Scrooge is also displayed as quite a hard character, 'Scrooge was not a man to be frightened by echoes' 'When they saw him coming on , would tug their owners into doorways and up courts', This is showing that he was not the sort of person that would yelp at the sound of an echo. Also people around the area knew him well enough to keep out of his way, even the guide dogs knew of him. When Scrooges nephew comes to see scrooge especially to invite him to his poor household where they can just about afford a Christmas lunch, to dine with him and his family on Christmas day. Scrooges nephew is a very jolly and warm person. Dickens contrasts Scrooge and his nephew; 'His face was ruddy and handsome; his eyes sparkled'. The first thing the nephew says when he sees Scrooge is, 'A merry Christmas, uncle! God save you!' Scrooge replies, 'Bah Humbug!' He then goes on to say, 'Merry Christmas! What right have you to be merry? What reason have you to be merry? You're poor enough.' This shows Scrooge in a very bad light. He is basically saying that his nephew should not be happy because he is poor. ...read more.

Trembling with the most fear he had ever experienced in his life, he bent down and read the name on the grave. The name on the grave read " Ebenezer Scrooge". Scrooge fell to his knees as he cried. We can see now that Scrooge has fully changed. He is prepared to change. He begged the phantom to let him go. He said that the lessons from these three ghosts would stay with him his whole life. He would enforce the Christmas spirit all year round. He said he would honour Christmas in his heart and he would rid the writing on the grave. The phantom collapsed and dwindled into a bedpost. The bedpost was his own. Scrooge swore that from this moment onward would live in the past, present and future. We can see that Scrooge's attitude as a person and businessmen have changed for good. He has given up his selfishness. He will care for others as much as himself. Scrooge then felt rejoiced. He was a new human being. Full of emotion and care. Scrooge then cried down to a young boy and asked him to buy the prize turkey for him and he would reward him with half a crown. Scrooge then decided to send it to Bob Cratchit and he would let him rejoice. Scrooge went over to Bob Cratchit and gave him the turkey. He offered him a raise so he could afford to keep his family on the go. Scrooge did more than he said he would. We have seen from this book that a man can change. Scrooge proved that he could be kind hearted. His attitude at first as a person was disrespectful and shamming. The same applied for his attitude as a businessman. In the end both of these changed. Scrooge is now a kind-hearted man full of joy. Scrooge now is a very generous businessman. As we saw he gave his employee Bob Cratchit a raise to support his family for many years. As Tiny Tim observed he noticed the kind heart of Mr. Scrooge and said, "God bless us, Every One!" ...read more.