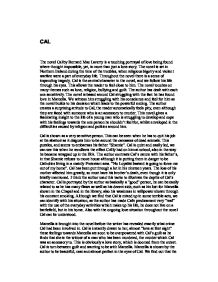 The novel Cal by Bernard Mac Laverty is a touching portrayal of love being found where thought impossible, yet, is more than just a love story. Discuss.

CAL The novel Cal by Bernard Mac Laverty is a touching portrayal of love being found where thought impossible, yet, is more than just a love story. The novel is set in Northern Ireland during the time of the troubles, when religious bigotry and violent warfare were a part of everyday life. Throughout the novel there is a sense of impending tragedy. Cal is the central character in the novel, and we follow his life through his eyes. This allows the reader to feel close to him. The novel touches on many themes such as love, religion, bullying and guilt. The author has dealt with each one sensitively. The novel is based around Cal struggling with the fact he has found love in Marcella. We witness him struggling with his conscience and feel for him as the novel builds to his decision which leads to the powerful ending. The author creates a surprising attitude to Cal, the reader automatically feels pity, even although they are faced with someone who is an accessory to murder. This novel gives a fascinating insight to the life of a young man who is struggling to develop and cope with his feelings towards the one person he shouldn't feel for, whilst enveloped in the difficulties caused by religion and politics around him. ...read more.

Also he feels guilt over the events which he has already contributed to "he went to his bedroom to eat again the ashes of what he had done". He is living as a Catholic in a mainly Protestant area. He is beginning to feel worthless due to his unemployment. Also he has many unresolved issues from his childhood. With all of this affecting him, it is not surprising that he gravitates towards something that he believes will bring him comfort, this is Marcella. We see from earlier in the novel that he associates safety and happiness with his mother, and as the only female he has ever been close to, this is how he has developed his view of women. It is almost as though he is reaching to Marcella as some kind of "security blanket". Also from recounts of his childhood, we see that he has guilt resulting from his mother's death, he hates her for leaving him, and knows he shouldn't. We can see just how big an effect that her death had by the brief mention of the self harm which Cal carried out afterwards. The relationship that forms between Cal and Marcella has come about in exceptional circumstances and faces many obstacles. The largest is obviously the guilt Cal feels and the secret which he has to keep from Marcella. ...read more.

The tragic ending had been threatening to appear from the start, yet it still stuns the reader. Cal wanted to be caught, he wanted to be punished for what he had done "as he stood in a dead man's Y-fronts listening to the charge, grateful that at last someone was going to beat him within an inch of his life" This basically sums up Cal's attitude throughout the book, he was trying to seek forgiveness and knew he could only be at peace with himself if he was punished. Cal had tortured himself for his actions; he had kept the image of the man dying freeze framed in his head, and could not have possibly surrounded himself anymore with reminders of the man he had helped kill. Cal needed to be found out so he could "cleanse" himself. Although the novel ends at a point where he and Marcella were ripped apart, and Cal was about to be physically assaulted and judged by police who would discriminate against him, we are left with a sense of hope as Cal may come out of this stronger. He will hopefully find peace within himself and then be able to attempt a relationship that was fair with Marcella, where he can be honest with her. If she could ever understand and forgive him, he may also be able to find his peace with God, stop torturing himself an at last find happiness. ...read more.