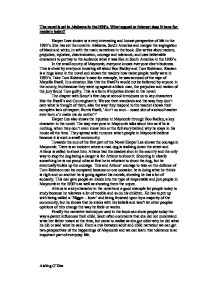 The novel is set in Alabama in the1930's. What appeal or interest does it have for readers today?

The novel is set in Alabama in the1930's. What appeal or interest does it have for readers today? Harper Lees shows us a very interesting and honest perspective of life in the 1930's. She has set the novel in Alabama, South America and merges the segregation of black and white, in with the main narratives in the book. She writes about racism, prejudice, injustice, discrimination, courage and tolerance, and uses believable characters to portray to the audience what it was like in South America in the 1930's. In the small county of Maycomb, everyone knows everyone else's business. This is show by everyone knowing all about Boo Radley and Tom Robinson. ...read more.

Harper Lee also shows the injustice in Maycomb through Boo Radley, a key character in the novel. The way everyone in Maycomb talks about him as if he is nothing, when they don't even know him or the full story behind why he stays in his house all the time. They spread wild rumours which people in Maycomb believe because it is such a small community. Towards the end of the first part of the Novel Harper Lee shows the courage in Maycomb. There is an incident where a mad dog is walking down the street and Atticus is called to shoot him. Atticus had the deadest shot in the country and the only way to stop the dog being a danger is for Atticus to shoot it. ...read more.

He has to put up with being called a 'Nigger - lover' and being frowned upon by a majority of the community, but he shows that he sticks with his beliefs and won't let other peoples opinions of him change the way he feels or works. Finally the narrative techniques used in the book can show people today the way a parent influences their child. Scott often comments that she did not understand what her father meant at the time, but came to realise as she got older why he did what he did or said what he said. From a mix between adult and child narration we can get two perspectives of the happenings of Maycomb and we can learn that tolerance is an important part of everyday life. ?? ?? ?? ?? Aisling O'Dea ...read more.