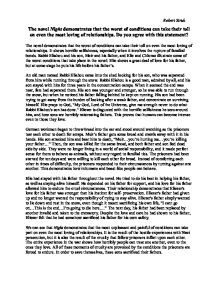 The novel Night demonstrates that the worst of conditions can take their toll on even the most loving of relationships. Do you agree with this statement?

This proves that humans can become intense even to those they love. German workmen began to throw bread into the car and stood around watching as the prisoners tear each other to death for scraps. Meir's father gets some bread and crawls away with it in his hands. His son attacked him and beat him to death, "Meir...you're hurting me...you're killing your father..." Then, the son was killed for the same bread, and both father and son lied dead side by side. They were no longer living in a world of social responsibility, and it made perfect sense for them to behave as animals, without any regard to familial ties. The prisoners had been starved for ten days and were willing to kill each other for bread. ...read more.

The next day, his father had been replaced by another invalid and taken to the crematory. Despite the love and care he had shown to his father, Eliezer felt that he had somehow sacrificed his father for his own safety. We can see that Night demonstrates that the most unpleasant and painful of conditions can take part on even the most loving of relationships. It is the result of the hostile experiences with Nazi persecution, but it is also the result of the cruelty that fellow prisoners inflict upon each other. The entire experience in the war shows how horribly people can treat one another, even to the ones they love. All of these moments of cruelty are provoked by the conditions the prisoners are forced to endure. In order to save themselves, these sons sacrificed their fathers. ...read more.