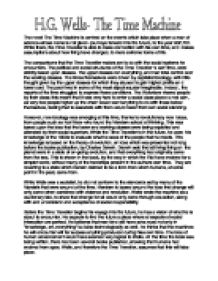 The novel The Time Machine is centred on the events which take place when a man of science-whose name is not given- journeys forward into the future, to the year 802,701. While there, the Time Traveller is able to make connection with his own time, and makes assumptions about how thing have changed, to more extreme forms of life. The comparisons that the Time Traveller makes are to do with the social systems he encounters. The political and social structures of the Time Traveller's own time, were strictly based upon classes. The upper classes ran everything, and had total control over the working classes. The times themselves were driven by capitalist ideology, with little thought given by the upper classes for which they abused to gain higher profits and lower cost. The poor lived in some of the most abject squalor imaginable. Indeed, the reports of the time struggled to express these conditions. The Victorians viewed people by their class; this meant that it was very hard to enter a social class above ones own, as very few people higher up the chain would want anything to do with those below themselves, feeling that to associate with them would lower their own social standing. ...read more.

It is then that he realises that the people he meets are perfectly evolved for the environment in which they live. Therefore the people, being communist, are seen as an improvement, as it is what humanity has evolved into. This could be seen as an improvement by the Time Traveller as he has a self-fulfilling prophecy. Before he left, the Time Traveller assumed that there by improvements in life, and therefore he sees them. As a socialist, Wells would want to see a communist future. However, because the people are "soon tired", the buildings have become dilapidated, with windows broken in many places. Due to there adoptions to what one might call the comfy life; they have lost the ability to do physical labour. In the Time Travellers second vision of the future, he sees that his idea of a world based upon communist ideas was wrong, there was, in fact, capitalism in an extreme form. The Eloi-whom he first met are the monsters of the world he sees, the equivalent of the upper and ruling classes of his own time. The Morlocks, who live underground, are the workers. He sees this as they live underground, and in the Time Traveller's own time, the poor are being forced into a more subterranean existence. ...read more.

After this, the Morlocks started to care for the Eloi, not just because it was what they have always done, but because it was the only was that they could have food to eat. The Eloi, while still appearing to be humanoid, had become the food source which the Morlocks ate. The message that Wells gives is clear: change must come, should the upper classes (however distant in the future) want to be more that" mere fatted cattle", for the classes below them to feed upon. Wells does not give a set way for this change to be implemented, nor a time scale for it (by using such a distant time, he makes in t easier for the change to be more gradual, ergo, more acceptable to the upper classes). He uses the Time Travellers to show that the ruling and upper classes are looking at the world through rose tinted glasses, unable to see that change is necessary for their fellow man. It would be interesting to see the reaction of the Time Traveller if he had travelled to a closer time, where the Eloi are the rulers still, oppressing the Morlocks, and to see how he then viewed them. ?? ?? ?? ?? ...read more.