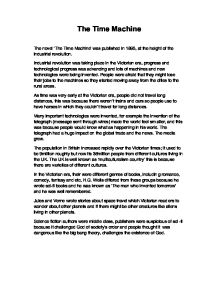 The novel The Time Machine was published in 1895, at the height of the industrial revolution.

The Time Machine The novel 'The Time Machine' was published in 1895, at the height of the industrial revolution. Industrial revolution was taking place in the Victorian era, progress and technological progress was advancing and lots of machines and new technologies were being invented. People were afraid that they might lose their jobs to the machines so they started moving away from the cities to the rural areas. As time was very early at the Victorian era, people did not travel long distances, this was because there weren't trains and cars so people use to have horses in which they couldn't travel for long distances. Many important technologies were invented, for example the invention of the telegraph (message sent through wires) made the world feel smaller, and this was because people would know what as happening in his world. The telegraph had a huge impact on the global trade and the news. The media grew. The population in Britain increased rapidly over the Victorian times; it used to be 9million roughly but now its 36million people from different cultures living in the UK. The UK is well known as 'multiculturalism country' this is because there are varieties of different cultures. ...read more.

This metaphorical idea it's very clever by the idea of him creating such idea that would even in now days been accepted. The Morlocks are creatures that live underground, they live in the dark and the time traveller is sure that they can see in the dark, and this also suggests that they are afraid of the light. The Morlocks are like savages, they look like ghosts when they are moving around in the and they also don't have any feelings towards people. H.G. Wells says that "while I stood in the dark, a hand touched mine, lank fingers came feeling over my face". This emphasises that they see more by touching and feeling people almost like a blind person would. The appearance of the Morlocks is described as stated "lank fingers", "unpleasant odour", "there eyes were abnormally large and sensitive", The Morlocks touch people without permission as the time traveller says "hand being gently disengaged". The Morlocks are unsophisticated creatures. H.G. Wells was a man who wanted peace and justice for all man kind, that's the whole purpose of the 'time machine'. The reason why he wrote the 'time machine' was that because the working class were classified as being 'normal human being' and for that they were treated very differently in comparison to the upper-class which had most of the power. ...read more.

Then the time traveler disappears. 'The time machine' novel is very difficult and it has very high standard context which is very difficult to interpret or understand. The novel also has old English language for example "queer" and also "therewith". The time machine novel is set for those who are very high Standard English speakers and readers because it is very sophisticated and not barbaric. The writer, H.G. Wells is a very descriptive writer. He uses many adjectives and adverbs. He does this to build up attention and atmosphere and make it more visual for the reader. There is a very mysterious atmosphere to the description of the time machine- he makes us wonder what will happen next. It is stated in the novel when the time traveler is showing the machine to his guests when he says "dance of a shadow", A metaphor and a personification that the shadows are coming to life. H.G. Wells uses lots of repletion as he repeats the word "parts" to emphasis that the machine is made up of lots of different materials. H.G. Wells makes his writing more vivid and uses words that modern readers might not understand the exact meaning of now days and he uses longer and more complex sentences to describe stuff. . ...read more.