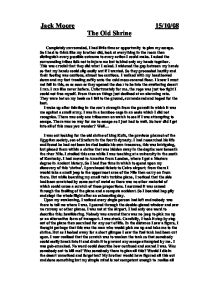 Jack Moore 15/10/08 The Old Shrine Completely surrounded, I had little time or opportunity to plan my escape. So I had to think like my brother did, look at everything in the room then distinguish every possible outcome to every action I could make. I asked the surrounding tribes folk not to injure me but to bind only my hands together. This was crucial that they did what I asked. I widened the gap between my hands so that my hands could slip easily out if I wanted. So they proceeded hastily and their footing was cautious, almost too cautious. I walked with my head bowed down and my feet treading softly onto the cold moss-covered floor. I knew I must not fail in this, so as soon as they opened the door to be into the sweltering desert I ran. I ran like never before. Unfortunately for me, the rope was just too tight I could not free myself. From then on things just declined at an alarming rate. They were hot on my heels so I fell to the ground, surrendered and hoped for the best. I woke up after fainting in the sun's strength from the pursuit in which it was me against a small army. I was in a bamboo cage in an oasis which I did not recognise. ...read more.

He saved my life so I trusted him, nearly as much as my own family. Little did I know that this would be the biggest mistake I would make in my insignificant life. He escorted me to an old village that was dusty, like a shanty town. He told me his past and fed me well. I owed my life to him. I told him of my expedition and all that I had researched. He enquired how I knew of this "shrine". I responded that using old scriptures found from the past and certain tablets helped decipher this. He mentioned that his village had one of their three rare statues stolen days earlier by a neighbouring tribe. This second tribe also held the information of the shrine and that one of their spies got evidence to believe that their statue was held in that very shrine. I got directions and went to the tribe for help and the rescue mission as well. I took Mustafa with me. As we entered their tribe territory, they interrogated us to see if we were thieves come to rob them but our quick thinking and smooth talking kept us safe. This tribe folk helped us and gave us the intimate details that could help us locate the 'shrine' without them personally leading both of us there. ...read more.

I had played right into his hands. The only time I could escape was when they all went for dinner. They were sitting around and talking before eating. At this point nobody is on guard but they still could see me. That attempt got me twenty lashes and it still is sore. I dare not try again. I am a prisoner held by the criminals themselves. I write this on a stone engraving all of this, hoping that once I die somebody will understand how I felt and tell this story to others around the world. To this day I have had no outside communication for ten years. They feed me minimal amounts and I cannot commit suicide as they have taken all of the sharp stones and give me flat ones to write on. My plan is to someday manipulate them and be free. All I say to this is that to trust no-one. Everybody has a bad side and even if they do save your life, they will pull you down. I will keep writing on these stones and one-day be free, dead or alive. All I hope is that my brother stays out of harms way and keeps a low profile. My twisted mind keeps telling me my brother is to blame but I try to argue against it. I just wish I could say goodbye to my only family member left alive, my brother Nigel. Word count: Approx 1700 words ...read more.