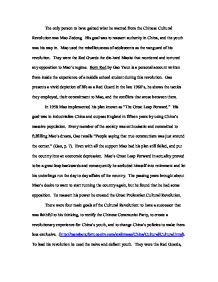 The only person to have gained what he wanted from the Chinese Cultural Revolution was Mao Zedong.

The only person to have gained what he wanted from the Chinese Cultural Revolution was Mao Zedong. His goal was to reassert authority in China, and the youth was his way in. Mao used the rebelliousness of adolescents as the vanguard of his revolution. They were the Red Guards the die-hard Maoist that murdered and tortured any opposition to Mao's regime. Born Red by Gao Yaun is a personal account written from inside the experience of a middle school student during this revolution. Gao presents a vivid depiction of life as a Red Guard in the late 1960's, he shows the tactics they employed, their commitment to Mao, and the conflicts that arose between them. In 1958 Mao implemented his plan known as "The Great Leap Forward." His goal was to industrialize China and surpass England in fifteen years by using China's massive population. ...read more.

They were the Red Guards, the group that were instructed by Mao to destroy the traditional values of China and openly criticize party officials. Starting innocently enough the Red Guards created dazibao, "big character posters" that were used to express opinions and slogans. One of the first acts of the red guards was making dazibao criticizing the Three Family Village (group of authors that obliquely condemned Maoist ideals). There were slogans all around Gao's school condemning the authors, one that Gao remembers was "The Three Family Village offended seven hundred million people, setting off a spiritual bomb greater than the A-bomb." (Gao, p. 35). Soon the Red Guards started to attack new enemies, their teachers. They called them bourgeois revisionist and capitalist-roaders, they created dazibao posted around the school about them. The students ridiculed their teachers for all sorts of things, whether something as a frivolous as a bad grade or for supporting the old ideals of Chiang Kai-Shek. ...read more.

The Red Guards believed so fiercely in Mao's ideology that it eventually led to their destruction. Arguments between different social classes tore the once tight group of friends apart. The Cultural Revolution brought out the worst in them. They loved the power they had, but it was all a facade, the only person who truly had all the power was Mao Zedong. With his cult of personality surrounding him he could make the Red Guards do whatever he wanted, and he did. So the Red Guards were not simply perpetrators of the Cultural Revolution but also victims. They lost their education and were brainwashed to be Mao's loyal servants. Gao is certainly regretful of his past and so he dedicates his book to his son "with hope that his generation will be wiser than mine." (Gao, Dedication) When everything was finished, Mao had succeeded. He had rid the country of his opponents and regained control of China. The cost was a generation of Chinese youth who had murdered, raped, and humiliated their fellow countrymen for an impossible dream. ...read more.