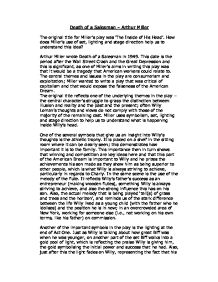 The original title for Miller's play was 'The Inside of His Head'. How does Miller's use of set, lighting and stage direction help us to understand this idea?

Death of a Salesman – Arthur Miller

The original title for Miller’s play was ‘The Inside of His Head’. How does Miller’s use of set, lighting and stage direction help us to understand this idea?

Arthur Miller wrote Death of a Salesman in 1949. This date is the period after the Wall Street Crash and the Great Depression and this is significant, as one of Miller’s aims in writing this play was that it would be a tragedy that American workers could relate to. The central themes and issues in the play are consumerism and exploitation; Miller wanted to write a play that was critical of capitalism and that would expose the falseness of the American Dream.

The original title reflects one of the underlying themes in the play – the central character’s struggle to grasp the distinction between illusion and reality and the past and the present; often Willy Loman’s thoughts and views do not comply with those of the majority of the remaining cast. Miller uses symbolism, set, lighting and stage direction to help us to understand what is happening inside Willy’s head.

One of the several symbols that give us an insight into Willy’s thoughts is the athletic trophy. It is placed on a shelf in the sitting room where it can be clearly seen; this demonstrates how important it is to the family. This importance then in turn shows that winning and competition are key ideas here and that this part of the American Dream is important to Willy and he prizes the achievements his son made as they show him as being superior to other people, which is what Willy is always striving to achieve, particularly in regards to Charly. In the same scene is the use of the melody of the flute. It reflects Willy’s father’s success as an entrepreneur (making wooden flutes), something Willy is always striving to achieve, and also the strong influence this has on his son. Also, the actual melody that is being played ‘tell(s) of grass and trees and the horizon’, and reminds us of the stark difference between the life Willy lived as a young child (with the father who he idolises) and the position he is in now; in an overcrowded area of New York, working for someone else (i.e., not working on his own terms, like his father) on commission.

Another of the important symbols in the play is the lighting at the end of Act One. Just as Willy is talking about how great Biff was when he was younger, on another part of the set Biff walks into a gold pool of light, which is reflecting the praise Willy is giving him, the gold symbolising the initial power and success that he had. Also, just after this the light fades on Willy, representing the fact that his career, his influence on his children and possibly his life are drawing to a close.

A further example of Miller’s symbolism in this play and his manipulation of non-naturalistic elements is in Act Two, the restaurant scene, with varied use of both lighting and music. The first of these symbols is the use of the ‘single trumpet note’ used in conjunction with ‘the light of green leaves’. This initiates the start of Willy’s mind thinking back to an event several years ago, the green of the leaves symbolising the time when the house was not surrounded by high rise flats, noise and pollution. Miller also says that the light ‘holds the air of a… dream’, which is insinuating that at this point in time Willy’s dreams for himself and his children had not yet been ruined. This is upheld by the naturalistic state of his living environment.

Throughout the scene the light continues to fluctuate and highlight different places and times. Another important part in this restaurant scene I when the music changes dramatically to accompany the presence of The Woman in Willy’s mind. The music is now ‘raw and sensuous’ highlighting one major part of Willy’s life, at this point in time, that does not fit into the same mould as the rest of his life; he is a family man, supportive of his children and striving to achieve new heights for his family, but now he is doing the very opposite of this by cheating on his wife, and so the music does not reflect any of the other, often light and cheerful melodies played on the flute. Up until Biff discovers his father with The Woman, no one else is aware of her part in Willy’s life, so even at this early stage, Willy will have thoughts inside his head which do not relate to those of an of the other central characters.

This essay engages well with the question. There is an interpretation of Miller using symbols within his sets to shape meanings, and I feel this is the right direction to take as there is little substance simply looking at stage ...

This essay engages well with the question. There is an interpretation of Miller using symbols within his sets to shape meanings, and I feel this is the right direction to take as there is little substance simply looking at stage directions. This essay has potential in the way it looks at symbols as techniques to manipulate the audience's reaction to Willy's tragedy. Being able to analyse motifs is a strong skill, and will be credited by examiners. However, I feel this essay needs to go one step further and discuss why the set, lighting and stage directions are effective in allowing the audience to interact with Willy and his downfall. It is not good enough at GCSE to state that these techniques are present.

The analysis here is good. There is a clear awareness of how symbols shape meanings, and allow the audience to associate the motifs with key themes within the play. Whereas other essays often don't have enough analysis after quotes, I would've liked to have seen a few more quotes here to show the examiner you have a thorough knowledge of the text and to back up a few of the points. This essay is very fluent in recognising techniques "manipulation of non-naturalistic elements" but as I said above, there needs to be a recognition of why these are used and what makes them effective. If I were writing this essay, I would explore how the changing light shows Willy's fluctuations between his controlled self and his uncontrollable past attacking his mind. A simple statement which recognises the effect of the lighting on stage, and then reflects a change in the mood for the audience, would show the awareness of drama and the significance of the character's presence on stage. This task centres around the staging, lighting and set, yet there is little evidence here which shows understanding of how these factors shape how a play is received and interpreted. Such insights are what examiners are looking for.

The essay has an okay structure. As I often write with GCSE essays, the introduction is irrelevant and adding background information about the play will gain you no credit. A short but concise introduction which engages with the question, posing a strong argument, will be well received by examiners. The second paragraph here would be a suitable introduction, and some of the ideas in the first should be weaved into the analysis to offer some contextual evidence. Technical terms are used well here. It was a shame there wasn't a conclusion, showing the essay's inability to form a coherent argument and so will be penalised. Further to this, I just feel that this essay is a collection of points, rather than writing towards a common goal of answering to the question. It is crucial to have a flowing argument, with each point always linking back to the question to ensure this is maintained. By following the PEEL mainframe for paragraphs (Point, Evidence, Explain, Link) your paragraphs should become more focused.