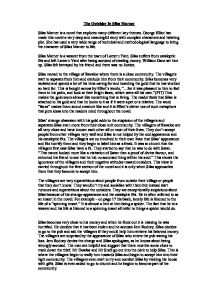 The outsider in Silas Marner.

The Outsider In Silas Marner Silas Marner is a novel that explores many different key themes. George Elliot has made this novel a very deep and meaningful story with complex characters and twisting plot. She has used a very wide range of technical and methodological language to bring the character of Silas Marner to life. Silas Marner is a weaver from the town of Lantern Yard. Silas suffers from cataleptic fits and left Lantern Yard after being accused of stealing money. William Dane set him up. Silas felt betrayed by his friend and there was no Justice. Silas moved to the village of Ravaloe where there is a close community. The villagers start to separate from him and exclude him from their community. Silas becomes very isolated and spends a lot of his time caring for and hoarding the gold that he has worked so hard for. This is bought across by Elliot's words, "...for it was pleasant to him to feel them in his palm, and look at their bright faces, which were all his own."(P17) ...read more.

The villagers are very superstitious about people from outside their village or people that they don't know. They wouldn't try and socialise with them but instead start rumours and superstitions about the outsiders. They are exceptionally suspicious about Silas because of his strange appearance and his cataleptic fits. He is often referred to as an insect in the novel. For example - on page 17 his basic, lonely life is likened to the life of a "spinning insect." It is almost a hint at him being a spider. The fact that he is a weaver and his life is likened to a spinning insect all refer to things a spider would do. Silas becomes very close to his money and when he finds out it is missing he was horrified. He decides that it has been stolen and he accuses Jem Rodney. Silas decides to go to the pub and ask the villagers if they could help him retrieve his beloved money. ...read more.

Silas' money is found along side Dunstan and Silas tells how his live revolved around his gold. Godfrey feels that he should make up for his brother's behaviour and offers to take Eppie away from him and remove the burden. Eppie refuses and Silas loves her so much that he is prepared to fight to keep her. Dunstan ends up with no child and is punished. Silas and Eppie become part of the community and the villagers no longer see Silas as a freak. Eppie has helped Silas become accepted because when Silas accepted her as his daughter the villagers began to comfort Silas and see him as a caring person. It is when they see that he is caring that they begin to see that he isn't all the things that he is rumoured to be, but actually he is just like them. Silas and Eppie go back to Lantern Yard and find that it has gone. Silas is saddened by this but realises that Ravaloe is his home now. ...read more.