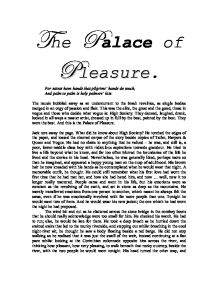 The Palace of Pleasure.

The Palace of Pleasure. For saints have hands that pilgrims' hands do touch, And palm to palm is holy palmers' kiss. The music bubbled away as an undercurrent to the brash revelries, as single bodies merged in an orgy of passion and flair. This was the elite, the great and the good, those in vogue and those who decide what vogue is: High Society. They danced, laughed, drank, looked in all ways a master artist, dressed up in full by the best, painted by the best. They were the best. And this is the Palace of Pleasure. Jack tore away the page. What did he know about High Society? He torched the edges of the paper, and tossed the charred corpse of the story beside copies of Tatler, Harpers & Queen and Vogue. He had no claim to anything that he valued - he was, and still is, a poor, lower-middle class boy with ridiculous aspirations towards grandeur. He tried to live a life beyond what he knew, and far too often blurred the boundaries of the life he lived and the stories in his head. Nevertheless, he was generally liked, perhaps more so than he imagined, and appeared a happy young man on the cusp of adulthood. His brown hair he now kneaded with his hands as he contemplated what he would wear that night. A memorable outfit, he thought. He could still remember what his first love had worn the first time that he had met her, and how she had hated him, and now ... well, now it no longer really mattered. People came and went in his life, but his emotions were as constant as the revolving of the earth, and set in stone as deep as the mountains. He merely transferred emotions from one person to another, which meant he always felt the same, even if he was emotionally involved with far more people than one. ...read more.

But I doubt it. And so, that brings me to you. For as long as I have known you, Annie, I have not fancied you, almost. In addition, John, as soon as I first heard you speak, I was instantly attracted to you. But I did not love you, not at all. And after California, everything changed. Having not seen anyone for almost two months, I returned, and it seemed, almost, that the world had been turned upside down. Instead of a gimpish geek was a svelte young man, and instead of a two-dimensional sports girl was a very much 3-D woman. So, foolishly, I fell for John. And, unbeknown to me, so did Annie. Saturday September 27th, one of my sixteenth birthday parties: I came so close to kissing you, John. Too close - I felt your flinch. Friday November 21st: an evening I promised John I would never remind him of, so I won't. Saturday December 6th: we sat much the same as this, and you listened to me, like this. Moreover, Annie realised I fancied John, and said she would never go out with me. By now, I was in love with both of you, and knew you both wanted one another, but were too afraid to ask. I could have spent the rest of my life in that moment. Tuesday December 9th: I tell Mannon everything, and I realise that it is with her that I am meant, or at least have the chance to spend with the rest of my life. Therefore, I set about trying to forget you both. Monday December 15th: the Christmas cards you receive are the last time I say 'I love you'. Monday December 29th: I watch you both pull on my bed, the same bed that you then sleep in: in your black boxers. So now I need a new bed. Tuesday December 30th: buy a new bed. ...read more.

He is just, well, you must know, he is yours. Moreover, he has been for over a month now. It is everything he does, and everything about him. He exudes a certain something, I do not know, and he's caught us, he's caught us both. He is an adored, as indeed you both are, and I am an adorer. Fate dictates that I can do no less. He chose to sleep in my bed; it was not my intention, although it was what I hoped. I swear he did not initiate it, I must have done, but he did not rebuke me. It was, it must have been that he encouraged it, I do not know how. He is just like that: John is your boyfriend, you must understand that. The point is, I can remember everything, I must have proved that to you by now; and the truth is, I cannot remember what happened that night, not all of it. All that I can do is try to make some logical sense of it - except that it defies reason! But then, I suppose, cannabis does that to oneself. Carlos remembers nothing, nothing at all because he was asleep. As for John, I do not know, I am scared to ask him; but he treats me in such a way as if nothing has happened. Nothing at all. Nevertheless, I know that something did, I just cannot work it out. My last memory, and even that I cannot declare with honesty, is I stroking his face, where his stubble grows, and he, he smiling, the way that only John can smile. After that, I truly remember nothing until I woke up, my legs almost entwined with his. Oh, Annie, I just cannot understand what happened, or why. I'm sorry, Annie, you must believe at least that.' Annie chose her words with care, and spoke with deliberation, saying, 'Jack, I do not think that I can ever talk to you again.' ...read more.