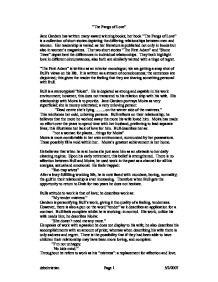 "The Pangs of Love" Jane Gardam has written many award winning books; her book "The Pangs of Love" is a collection of short stories depicting the differing relationships between men and women. Her readership is varied: as her literature is published not only in books but also in women's magazines. The two short stories "The First Adam" and "Stone Trees" depict best the differences in individual relationships. They both highlight love in different circumstances, also both are similarly tainted with a tinge of regret. "The First Adam" is written as an interior monologue; we are getting a snap shot of Bull's views on his life. It is written as a stream of consciousness; the sentences are disjointed; this gives the reader the feeling that they are sharing something personal with Bull. Bull is a stereotypical "bloke". He is depicted as strong and capable in his work environment; however, this does not transcend to his relation ship with his wife. His relationship with Moira is to provide. Jane Gardam portrays Moira as very superficial; she is money orientated; a very unloving person: "Dead centre she's lying ........on the winter side of the mattress." This reinforces her cold, unloving persona. ...read more.

He is judging the woman as shallow; this could be a reflection of Moira's attitudes: "not been to Cartier lately." Bull does not know this woman. After dinner, the woman goes back to Bull's room with him. Bull for a split second thinks about being unfaithful to Moira. He staves off his desires by reflecting on all the woman's negative points: "poor old hands...........necks.....patched brown...." He takes her to the lift. He has had many experiences with women in similar situations before. He believes the crows would tell him: "Keep off her, Bull. There's no future" He returns to Moira; he still has the extension to build. The story "Stone Trees" is also an interior monologue; it is told by a female narrator whose husband has passed away. Her thoughts are comprised of disjointed syntax giving the feeling of melancholy, grief and loss. The woman gives the impression of being right on the edge of her sanity. Gardam uses the words, "So now that he is dead" repetitively; these give the feeling of being on a train journey; which is where the narration begins. The narrator has been controlled by her husband; she has lived her life through him; never being independent. ...read more.

Therefore, she makes materialistic demands to fill this void. Her life reflects un-fulfilment. Moira has become harsh, cold and self-contained. She does not know how to need Bull anymore, emotionally. Jane Gardam writes the monologues in such away that you find yourself analysing both sides of the relationship. In "Stone Trees" one cannot help but feel sympathy for the narrator; however, she has accepted her husbands, behaviour, even condoned it. Her life is his life. Their relationship was symbiotic she lived off him. When faced with life alone she found another focus: his son. Anna and Toms relationship was full of lost opportunity, she loved him dearly, he loved God; if he had been more aware of Anna she would not of strayed. Both couples, in both stories, lack in the shared, experience of children; this suggests that possibly there is regret tainting the relationships. There is also the similarity in both monologues regarding the husbands selfish behaviour. Bull and his desire to place work above everything, even his marriage, and the narrators husband a serial philanderer. The women have taken a back seat to their husbands ambitions; be it career wise or love orientated. The difference being that Moira has created her own identity whilst the narrator has hung onto the shreds of her marriage. Moira, it would seem, stays married for financial gain as opposed to any emotional attachment. debchristian Page 1 5/2/2007 ...read more.