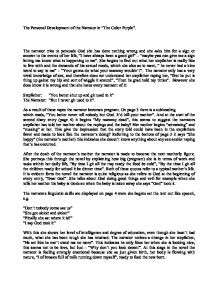 The Personal Development of the Narrator in &amp;#147;The Color Purple&amp;#148;.

The Personal Development of the Narrator in "The Color Purple". The narrator tries to persuade God she has done nothing wrong and she asks him for a sign or answer to the events of her life, "I have always been a good girl" - "maybe you can give me a sign letting me know what is happening to me". She begins to find out what her stepfather is really like to live with and the demands of his sexual needs, which she also as to meet, " he never had a kine word to say to me" - "Your gonna do what your mammy wouldn't". The narrator only has a very vivid knowledge of sex, and therefore does not understand her stepfather raping her, "first he put is thing up gainst my hip and sort of wiggle it around", "Then he grad hold my titties". However she does know it is wrong and that she hates every moment of it: Stepfather: "You better shut up and git used to it" The Narrator: "But I never git used to it". As a result of these rapes the narrator becomes pregnant. On page 3 there is a subheading which reads, "You better never tell nobody but God. It'd kill your mother". And at the start of the second diary entry (page 4) ...read more.

But he got so many of us. All needing something" - this sounds like she has feelings for him. (not quite sure why?) The narrator is concerned for Nettie because she as a boyfriend and he has three children. With her witnessing her mother's death coursed by a mixture of difficult children and her Stepfather she fears for Nettie, "It be more than a notion taking care of children ain't even yourn. And look what happened to Ma". Then narrator has been raped and beaten by her stepfather, "he beat me today". She develops great abhorrence and hate towards him and men in general; "I don't even look at mens". She begins to make the connection between her suffering and male-stream domination. (Stepfather) With this she starts looking to the female gender for comforting thoughts, "I look at women. I'm not scared of them". The narrator is thinking about her mother's death and she blames her stepfather, "Trying to believe his story kilt her". This quote can also be used to link the first part of the essay, when I connected the first comment on page 3 (letter1) with the beginning of the 4th page (ltter2). I suggested that the narrator's stepfathers had twisted the facts about the rapes and pregnancy and the above quote seems to reinforce that analogy. ...read more.

Like everything I seen, she seen, and she pondering it". The baby's "mum" tells Celie the baby is called Pauline, but she calls her Olivia. Then Celie tells the reader about the embroidery she did on the baby's clothes - Olivia, The "mum" say's she calls her Olivia because she looks holy. This seems a feeble reason for calling her Olivia and the reader begins starts to think the baby probably is Celie's. Celie and the baby's "mother" are having a conversation, Celie is really enjoying herself, however when the baby's dad comes he stops the fun immediately and Celie is yet again left with another male negative encounter. In letter 11 we learn that Nettie comes to stay with Celie and her husband because she has run away from Alphonso. Nettie presence makes Celie feel more comfortable. Celie shows evidence that she still cares more about her sister than herself, "It nearly kill me to think she marry somebody like Mr.________". Even though Celie, much of the time, is by herself she say's "long as I can spell G-O-D is got somebody along". Eventually Mr.________ realises he has failed to seduce Nettie and thrown her out, there is a dramatic plead to let Nettie stay but Mr. ________ ignores them and regardlessly splits the sisters up. This makes Celie feel lost unwanted and alone, because Nettie was the one who always passed on compliments to her and made her feel better about herself and intelligence. ...read more.