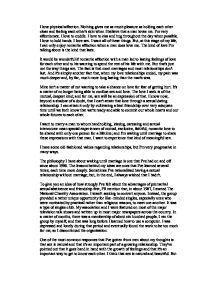 The philosophy I have about waiting until marriage is one that I've had on and off since about 1986.

I love physical affection. Nothing gives me as much pleasure as holding each other close and feeling each other's skin when I believe that a man loves me. I'm very affectionate. I love to cuddle. I love to kiss and hug throughout the day when possible. I love to hold hands. I love sex. I want all of these things. But, at this stage of my life, I can only enjoy romantic affection when a man does love me. The kind of love I'm talking about is the kind that lasts. It would be wonderful if romantic affection with a man led to lasting feelings of love for each other and to his wanting to spend the rest of his life with me. But that's just not the way things are. The fact is that most marriages and most relationships don't last. And it's simply another fact that, when my love relationships ended, my pain was much deeper and, by far, much more long lasting than the man's was. Mine isn't a matter of not wanting to take a chance on love for fear of getting hurt. It's a matter of no longer being able to confuse sex and love. ...read more.

I was depressed and lonely during that period and eventually found the work to be too much for me; so I discontinued the organization. One of the most common responses that I've gotten from men about my thoughts is that sex is natural and that it's an important part of a growing relationship. They've pointed out that it goes hand in hand with the growth of feelings and that it's an important way to get to know each other. I think that sex is natural and beautiful. But no matter how great the short-term benefits may be, that's all they're likely to be - short-term. I'm not speaking for all women, but if I were to have sex with a man that I really liked, I'd most likely become quite bonded with him. Indeed, my feelings for him would deepen with the physical intimacy. And because of that bond, I'd be devastated if and when our relationship ended. That bond has always been much stronger for me than it has been for the man. I'm looking for a man who wouldn't want to put me at such an unnecessary risk. That kind of genuine caring is worth more to me than all the emotions that exist in a usual love affair. ...read more.

As I look around me, I see that most people are alone and feeling at least somewhat frustrated in their desire for someone to love and to be loved by. I know that most people get emotionally and physically involved when they're virtual strangers to each other. I think that the way that I've approached relationships in the past doesn't really work. I'm not saying that my values are for anyone else. But I'm just not going to do what I now know doesn't work, and I'm going to do what I have every reason to believe will work, at least for me and for one special man. I haven't meant to convey that I think that there aren't any men who consider it a matter of their own self-care to wait until marriage themselves. Yet I know that such men would be very rare. So, although I'm open to the wonderful possibility, I don't expect that I'll necessarily find a man who already holds these ideals as deeply as I do. But I know that I'll be able to keep exploring a friendship with a man only if, along the way, he learns to respect these values and embrace them utterly, if he hasn't already learned to do so. I'm hopeful about all the happiness and closeness that I believe is possible. ...read more.