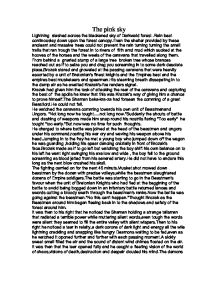 The pink sky Lightning slashed across the blackened sky of Darkwald forest .Rain beat continousley down upon the forest canopy.Even the shelter provided by these ancieant and massive trees could not prevent the rain turning turning the small trails that ran trough the forest in to rivers of filth amd mud which sucked at the hooves of the horses and the weels of the caravans that travelled along them. From behind a gnarled stump of a large tree broken tree whose brances reached out as if to seize you and drag you screaming in to some dark desolate place,Brozak stared and groweled at the passing caravans that were heavily escorted by a unit of Bretonian's finest knights and the Empires best and the empires best musketeers and spearmen.His steaming breath dissapating in to the damp air as he awaited Krazak's-foe renders signal. ...read more.

dancing crazially in front of Brozak's face.Brozak made as if to go left but watching the boy shift his own balance on to his left he went right swinging his axe low and wide , the boy fell to the ground screaming as blood jetted from his severed artery.He did not have to endure this long as the next blow crushed his skull. The fighting carried on for the next 45 minuts.Musket shot mowed down beastmen by the dozen with precise volleys,while the beastmen slaughtered dozens of Empire soldigers.The battle was starting to go in the Beastmen's favour when the unit of Bretonian Knights who had fled at the beggining of the battle to avoid being bogged down in an infantary battle returned lances and swords cutting a bloody swath through the beastmen's ranks.Now the battle was going against the beastmen."No this can't happen."Thought Brozak as the Beastmen around him began fleeing back in to the shadows and safety of the forest around him. ...read more.

And were at once beautiful and despicable women,so much so that he had to restrain himself from rushing forward and touching them,but to do so he knew was almost certain death. They leapt gracefully in to battle giving each victim the deadliest yet softest of caresses.Wherever they went a broken wreck of a soldiger fell. The battle was once again going in the beastmens favour.Krazak rushed in to the fray once again with renewed ferocioty felling imperial soldigers by the dozen.At the end of the battle Krazak-foe-render raised his hand hi and pointing to the pink sky bellowed his thanks to the gods.He then congrualated Brozak on a battle well fought,then went to goin the rest of the herd in the celebrations. Brozaks rise to power had begun..................... in the following weeks ...read more.