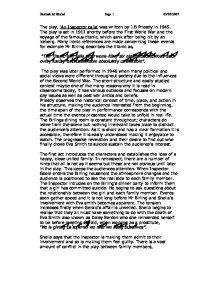 The play, 'An Inspector calls' was written by J.B Priestly in 1945. The play is set in 1912 shortly before the First World War and the voyage of the famous titanic, which sank after being hit by an iceberg.

The play, 'An Inspector calls' was written by J.B Priestly in 1945. The play is set in 1912 shortly before the First World War and the voyage of the famous titanic, which sank after being hit by an iceberg. Many ironic references are made concerning these events for example Mr Birling describes the titanic as, "The Titanic-she sails next week-forty six eight hundred tons-and every luxury-and unsinkable absolutely unsinkable". The play was later performed in 1946 when many political and social views were different throughout society due to the influences of the Second World War. The short structure and easily studied context maybe one of the many reasons why it is read in classrooms today, it has various outlooks and focuses on modern day issues as well as post war antics and beliefs. Priestly observes the historical context of time, place, and action in his structure, making the audience interested from the beginning, the time span of the play in performance corresponds with the actual time the events presented would take to unfold in real life. The Birlings dining room is constant throughout; characters do leave from the scene but nothing irrelevant takes place to distract the audience's attention. As it is short and has a clear formation it is accessible, therefore it is easily understood making it enjoyable to watch. ...read more.

Sheila not only is prepared to admit her faults; she also appears anxious to change her behaviour in the future, "I'll never, never do it again", Sheila is unable to accept her parent's attitude and is amazed that they have not learned anything from this episode. The suspense is increased greatly when Mr Birling rings up the infirmary. "Have you had a girl bought in this afternoon who committed suicide by drinking disinfectant-or any like suicide? Yes, I'll wait". When the audience is placed in, the situation, waiting for the answer, causes a large amount of tension between play and audience. The cliff-hanger that the audience is left with at the end of the play, when a telephone call is announced by Mr Birling "That was the police. A girl has just died-on her way to the infirmary-after swallowing some disinfectant. And a police inspector is on his way here to ask questions", ensures that the audience will leave in a state of shock, which definitely is a huge example of an effective play both in performance and study. The Inspector acts as a huge part in the play. He firstly sets the scene; he questions the Birlings' morals. He is straight to the point creating atmosphere and creating much tension during the play. The inspector is rude and nasty; he knows what the Birlings have done and therefore takes advantage of this using forceful interrogation, by knowing this he moves the story along and fills in many gaps. ...read more.

Inspector Goole even points this out, "You are offering money at the wrong time Mr. Birling". Mr. Birling is a 'self made man' his first and only priority is to make money "It's my duty to keep labour costs down". He is over powered by politics and is subjectively a former mayor and in the running for a knight-hood. It seems he does not have his own opinion or take responsibility for his actions, this is shown in his visions of the future for example the Titanic which he thought which he described as unsinkable He also commented on how he believed in 1940 there would be peace and prosperity, he was wrong in 1940 the Second World War was taking place. All of Mr. Birling's visions were incorrect. After the Inspector has left, he continues to ignore the shameful things that his family has done. When it appears that the Inspector might have been a hoax, he is happy to believe that everything is as it was a few hours before, he even accuses Eric and Sheila as "The younger generation who know it all". This is an example of his pride, he must think of his reputation. J.B Priestly is attacking the privileges of class in the play. He is saying that there should be more equality and we should not take our life style for granted. We also should take responsibility for our actions. ?? ?? ?? ?? Hamzah M Khaled Page 1 02/05/2007 ...read more.