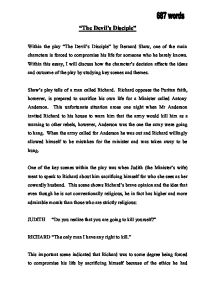 "The Devil's Disciple" Within the play "The Devil's Disciple" by Bernard Shaw, one of the main characters is forced to compromise his life for someone who he barely knows. Within this essay, I will discuss how the character's decision affects the ideas and outcome of the play by studying key scenes and themes. Shaw's play tells of a man called Richard. Richard opposes the Puritan faith, however, is prepared to sacrifice his own life for a Minister called Antony Anderson. This unfortunate situation arose one night when Mr Anderson invited Richard to his house to warn him that the army would kill him as a warning to other rebels, however, Anderson was the one the army were going to hang. ...read more.

This scene also portrayed the ironic contrast within 'The Devil's Disciple' of a non-religious person having higher morals than those who are religious. A second key scene was when Antony Anderson came to Richard's rescue, declaring Richard was not him, however, Anderson had safe conduct and therefore could not be hung. This brought a conclusion to the play; all of the characters' lives being spared. The twist however, was that due to Richard being prepared to sacrifice himself for Anderson, this made Anderson realise that being a minister was not the job for him: ANDERSON "I though myself a decent minister of the gospel of peace; but when the hour of trial came to me, I found that it was my destiny to be a man of action." ...read more.

This fact played a role within the play as Richard's mother did not inherit the house when her husband died and she only received the interest from the money that she had originally brought into the marriage. This therefore meant that Richard inherited the house as the eldest son and if this had not happened then Richard would not have been given the chance to sacrifice himself to prove he was a good man and could help someone else, despite being called a Devil's Disciple just because he disagreed with the narrow-mindedness of the Puritan faith. In conclusion, 'The Devil's Disciple' contained a character that was forced to compromise his life because of his own ethics and morals. The character's decision affected the ideas and the outcome of the play to be a positive one rather than a negative one and made the play more enjoyable. ...read more.