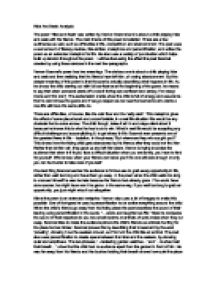 The poem Hide and Seek was written by Vernon Scannel and is about a child playing hide and seek with his friends. The main theme of this poem is isolation.

Hide And Seek: Analysis The poem 'Hide and Seek' was written by Vernon Scannel and is about a child playing hide and seek with his friends. The main theme of this poem is isolation. There are a few subthemes as well, such as difficulties in life, competition and abandonment. The poet uses a vast amount of literary devices, like similes, metaphors and personification, and writes the poem as an extended metaphor for life. He also uses a variety of punctuation which helps build up tension throughout the poem. I will be discussing the effect the poet Scannel creates by using these devices in the next few paragraphs. Vernon Scannel's poem has two meanings. The obvious one is about a child playing hide and seek and then realising that his friends have left him, showing abandonment. But the deeper meaning of this poem is that the poet is actually describing what happens in life. ...read more.

One last thing Scannel wanted his audience to follow was to grab every opportunity in life, rather than wait too long and have them go away. In the poem when the child waits too long to uncover himself he was too late because his friends had already gone. If he would have done sooner, he might have won the game. In the same way, if you wait too long to grab an opportunity, you just might miss it out altogether. Since the poem is an extended metaphor, Vernon also uses a lot of imagery to make this possible. One of the types he uses is personification to describe everything around the child. When the child's friends go away from his hiding place the poet describes the sound of their leaving using personification in the quote, "...words and laughter scuffle," Here he compares the sound of their departure to sounds small rodents or animals of sorts make when they run away. ...read more.

One last thing to mention is the punctuation use by the poet. He masters punctuation in this poem by using exclamation marks for confidence ('I've won!'), enjambments for increase in tension ('whatever happens-you mustn't sneeze...') and short sentences ('don't breathe. Don't move. Stay dumb.') , to make the poem move along faster. Overall, Vernon Scannel's poem 'Hide and Seek' is based on the children's game 'hide and seek' but is actually an extended metaphor for facing difficulties in life. Scannel uses a variety of literary skills such as imagery and use of punctuation to make the reader feel all the emotions the child is going through. The poet makes us feel cramped when the child is hiding and the loneliness and pain when the cold bothers him and his friends leave him. I think that the way Vernon Scannel has managed to put in the struggles in life into such a simple children's game is brilliant and I feel that the literary devices he has used is the key to connecting to the readers. ...read more.