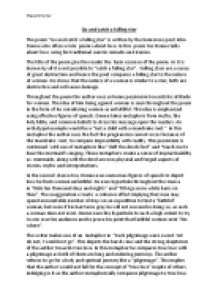 ﻿Mayank Kumar Go and catch a falling star The poem ?Go and catch a falling star? is written by the humorous poet John Donne who often wrote poems about love. In this poem too Donne talks about love using his traditional caustic remarks and ironies. The title of the poem give the reader the basic essence of the poem. As it is known by all it is not possible to ?catch a falling star?. Falling stars are a cause of great destruction and hence the poet compares a falling star to the nature of women. He shows that the nature of a woman is similar to a star; both are destructive and will cause damage. Throughout the poem the author uses extreme pessimism towards his attitude for women. The idea of him being against women is seen throughout the poem in the form of he considering women as unfaithful. This idea is emphasized using effective figures of speech. Donne takes metaphors from myths, the holy bible, and common beliefs to stress his message upon the readers. ...read more.

Donne uses the hyperbole to such a high extent to try to win over his audience and to prove his point that faithful women exist ?No where?. The writer makes use of an metaphor in ?Such pilgrimage were sweet. Yet do not, I would not go?. This depicts the harsh view and the strong skepticism of the author towards true love. In this metaphor he compares true love with a pilgrimage as both of them are long and enduring journeys. The author refuses to go for a holy and spiritual journey like a ?pilgrimage?. This implies that the author would not fall for the concept of ?true love? inspite of others indulging in it as the author metaphorically compares pilgrimage to true love. In the last four lines of the poem Donne becomes most censure and strongly chides against the female sex. They potray women as an extremely unfaithful species which easily betray the male sex. In the final line, Donne deliberately drops the word ?one? signifying that it is obviously out of question. ...read more.

There is an individual idea expressed in each of the stanzas, each one is made coherent with use of various figures of speech. The 7th and 8th lines of each stanza, placed prior to the last line explaining what the true meaning of each stanza is, are significantly shorter ?containing only two words- than the other lines. Thus each stanza has an introduction, a raising action, a climax, a falling action and a conclusion. This is yet another one of his techniques used to build up the suspense and deliver his message to his readers successfully. This poems gives the readers a huge insight into the lives of Donne. Donne?s skepticism towards true love is probably reflective of some harsh experiences faced by him. He might have suffered setbacks in his relationships, where women would have betrayed him with other men. This probably had a deep impact on him and caused him to write the poem. This poem could be Donne?s way of expressing his anger, by cursing the entire female sex. He would probably be believing in anti-feminist theories, believing that males are ?better? sex because of the female sex?s unfaithful nature. ...read more.