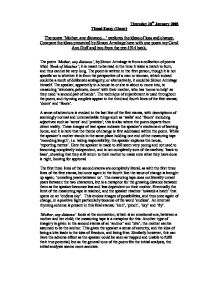 The poem 'Mother, any distance...' explores the ideas of loss and change. Compare the ideas presented by Simon Armitage here with one poem my Carol Ann Duff and two from the pre-1914 bank.

Thursday 28th January 2005 Timed Essay (1hour) The poem 'Mother, any distance...' explores the ideas of loss and change. Compare the ideas presented by Simon Armitage here with one poem my Carol Ann Duff and two from the pre-1914 bank. The poem 'Mother, any distance', by Simon Armitage is from a collection of poems titled 'Book of Matches'; it is meant to be read in the time it takes a match to burn, and thus cannot be very long. The poem is written in the first person, though it is not specific as to whether it is from the perspective of a man or woman, which indeed could be a result of deliberate ambiguity, or alternatively, it could be Simon Armitage himself. The speaker, apparently in a house he or she is about to move into, is measuring 'windows, pelmets, doors' with their mother, who has 'come to help' as they need 'a second pair of hands'. The technique of enjambment is used throughout the poem, and rhyming couplets appear in the third and fourth lines of the first stanza; 'doors' and 'floors'. A sense of adventure is evoked in the last line of the first stanza, with descriptions of seemingly normal and unremarkable things such as 'walls' and 'floors' including adjectives such as 'acres' and 'prairies'; this is also where the poem departs from direct reality. ...read more.

As with Mother, any distance...' the technique of enjambment is used, but no obvious rhyming scheme is present, though the title is repeated through the text. 'I'm ten years away', the first words of the poem, becomes clear in the second stanza's 'I'm not here yet' which shows that the scene at the start of the poem comes before the birth of the speaker, who could be the poet herself. 'Marilyn', presumably the speaker's mother, compares to the actor Marilyn Monroe with the line 'dress blows round your legs', evoking images of a scene from the film 'The Seven Year Itch', perhaps also indicating that the speaker had a high opinion of her mother, comparing her to a glamorous icon. This contrasts with 'Mother, any distance...' where the speaker does not offer any real opinion as to their mother or their opinion of her. Much more focus is also given on the characters, in particular the mother, and their personalities in this poem as opposed to 'Mother, any distance...'. The speaker's fantasies as a young woman are contrasted with the more harsh reality of parenthood that will come 'ten years' later; 'The thought...could bring'. The idea of change is directly addressed here as the speaker compares the immense difference between being childless and being a parent. Loss, in a sense, is also addressed when the speaker indicates that her birth and 'possessive yell' heralded the end of the more happy times in her mother's life. ...read more.

'The Song of the Old Mother' by William Butler Yeats, once again addresses another different type of loss and age, similar and different to the change in 'Mother, any distance...'. Though both speakers, in the first person here as with the other poems, talk about growing older, 'Mother, any distance...' addresses growing up whereas 'The Song of the Old Mother' talks of growing old. The poem, using rhyming couplets, is a simple monologue with speaker, an old woman, describing her daily routine and contrasting in with the daily routines of younger people, and ironically, how much harder her own is; 'I rise in the dawn' - 'Young...their bed'. By the time her work is done, 'stars are...peep', showing how long she toils. The fire she lights begins as a 'seed' in the morning, consequently growing, and at the end of the day, 'the seed...and cold'. This could be a metaphor for the loss of energy associated with old age. All four poems address different forms of loss and change, and explore them in different ways, and thus contrast to one another in different ways. In particular 'On my first Sonne' addresses the emotions related to loss, whereas 'Before You Were Mine' explores the physical aspect of change by switching through tenses. Some contain similarities, such as 'Mother, any distance...' and 'The Song of the Old Mother' in the way they address age, but all use different techniques in the way they explore the themes mentioned above. ...read more.