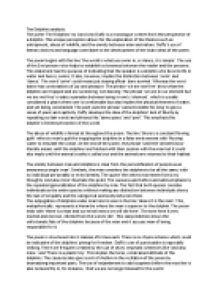 ﻿The Dolphins analysis: The poem ?The Dolphins? by Carol Ann Duffy is a monologue written from the perspective of a dolphin. This unique perception allows for the exploration of the themes such as entrapment, abuse of wildlife, and the enmity between man and nature. Duffy?s use of literary devices and language contribute to the development of the main ideas of the poem. The poem begins with the line ?the world is what you swim in, or dance, it is simple?. The use of the 2nd person voice helps to establish a closeness between the reader and the persona. This statement has the purpose of indicating that the speaker is a dolphin who lives its life in water and hence, swims. ...read more.

The abuse of wildlife is hinted at throughout the poem. The line ?there is a constant flowing guilt? refers to man?s guilt for trapping the dolphins in a false environment with ?flowing? water to emulate the ocean. At the end of the poem, the phrase ?until the whistle blows? literally means until the dolphins are finished with their session with the man but it could also imply until the animal cruelty is called out and the animals are returned to their habitat. The enmity between man and dolphins is clear from the personification of people as an anonymous single ?man?. Similarly, the man considers the dolphins to be all the same, with no individual personality or even identity. ...read more.

There is no rhyme scheme which could be indicative of the dolphins? pining for freedom. Duffy?s use of punctuation is especially striking. There are frequent created by the use of short, emphatic sentences like ?and also mine.? and ?There is a plastic toy?. This implies the terse, constrained attitude of the dolphins. The caesuras also give a sort of rhythm in the recitation of the poem by dramatizing important parts. The use of enjambment to add suspense before the next line is also noteworthy in, for instance, ?And we are no longer blessed for the world Will not deepen to dream in?. The pause after ?world? makes the reader wonder what will come next and gives the line a sense of enigma. Overall, the mood Duffy elicits form the reader by her use of various structures and rhythmic devices helps compound the message of ?The Dolphins?. ...read more.