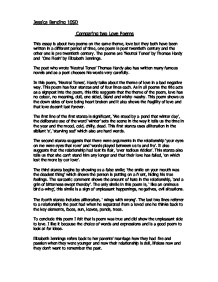 . The poems are 'Neutral Tones' by Thomas Hardy and 'One Flesh' by Elizabeth Jennings.

Jessica Bending 10SD Comparing two Love Poems This essay is about two poems on the same theme, love but they both have been written in a different period of time, one poem is post twentieth century and the other one is pre twentieth century. The poems are 'Neutral Tones' by Thomas Hardy and 'One Flesh' by Elizabeth Jennings. The poet who wrote 'Neutral Tones' Thomas Hardy also has written many famous novels and as a poet chooses his words very carefully. In this poem, 'Neutral Tones', Hardy talks about the theme of love in a bad negative way. This poem has four stanzas and of four lines each. As in all poems the title acts as a signpost into the poem, this title suggests that the theme of the poem, love has no colour, no meaning, dull, one sided, bland and wishy-washy. This poem shows us the down sides of love being heart broken and it also shows the fragility of love and that love doesn't last forever. ...read more.

The sarcastic comment shows the amount of hate in the relationship, 'and a grin of bitterness swept thereby'. The only simile in this poem is, ' like an ominous bird a-wing', this simile is a sign of unpleasant happenings, negatives, evil situations. The fourth stanza includes alliteration, ' wings with wrong'. The last two lines referrer to a relationship the poet had when he separated from a loved one he thinks back to the key elements, faces, sun, leaves, ponds, trees. To conclude this poem I felt that is poem was true and did show the unpleasant side to love. I like it because the choice of words and expressions and is a good poem to look at for ideas. Elizabeth Jennings refers back to her parents' marriage how they had fire and passion when they were younger and now their relationship is dull, lifeless now and they don't want to remember the past. ...read more.

' Of having little feeling - or too much', refers back to when the couple had fire, passion and now there is no flicker of romance. 'Chastity faces them, a destination', remains the old coupe of the wonderful past they had. The third and final stanza includes a metaphor and a simile, ' Silence between them like a thread to hold And not wind in. And time itself's a feather'. Also the use of juxtapositioning is used here, ' Do they know they're old. These two who are father and mother. Whose fire, from which I came, has now grown cold? I enjoyed both these poems because it was interesting to see the different use of language in a different period of time. As nowadays the use of correct punctuation and the shortening of words is becoming more and more popular but in the time of when these two poems where standard English and expression was used. These poems also show the negative side of love and that it don't last forever. ...read more.