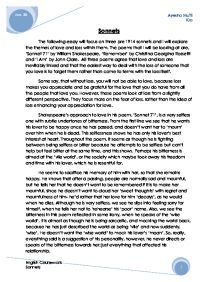 The poems that I will be looking at are, Sonnet 71 by William Shakespeare, Remember by Christina Georgina Rossetti and I Am by John Clare.

Sonnets The following essay will focus on three pre 1914 sonnets and I will explore the themes of love and loss within them. The poems that I will be looking at are, 'Sonnet 71' by William Shakespeare, 'Remember' by Christina Georgina Rossetti and 'I Am' by John Clare. All three poems agree that love and loss are inevitably linked and that the easiest way to deal with the loss of someone that you love is to forget them rather than come to terms with the loss itself. Some say, that without loss, you will not be able to love, because loss makes you appreciate and be grateful for the love that you do have from all the people that love you. However, these poems look at loss from a slightly different perspective. They focus more on the fear of loss, rather than the idea of loss enhancing your appreciation for love. Shakespeare's approach to love in his poem, 'Sonnet 71', is a very selfless one with subtle undertones of bitterness. From the first line we see that he wants his lover to be happy once he has passed, and doesn't want her to 'mourn' over him when he is dead. This selflessness shows he has only his lover's best interest at heart. Throughout the poem, it seems as though he is fighting between being selfless or bitter because he attempts to be selfless but can't help but feel bitter at the same time, and this shows. ...read more.

The different takes that the two poets have on loss could be due to their backgrounds. Rossetti was a very religious person, devoted to the Church of England, who wrote a range of devotional, romantic, and children's poems. Her religious beliefs were so strong that she broke off her engagement when she found out that her fianc� was a Roman catholic. She could have a very religious view on death and passing over, which is why the main tone in her sonnet is very peaceful and accepting, with hints of sadness. For example, we see how she speaks of the things her lover will never be able to do, like 'hold' her 'by the hand', and how it will be too late to 'counsel and pray'. She discusses all the things she'll lose; however, she never turns to bitterness, just sadness. Because of the times of when the engagement broke off and when she wrote this sonnet, the meaning behind it could be a very indirect goodbye note to her fianc�. She doesn't want him to grieve over her rejection, but rather to move on maybe. This sonnet could have many meanings or messages, this being one of them. Or, it could be like the Shakespearean sonnet- a piece of early advice on how to deal with grief for when the poets pass away. ...read more.

I think that this line summarizes the direct relation between love and loss because it is evidence that the more you love someone the stranger or harder it is to come to terms with their loss. When in the asylum, it was almost as if Clare gives a taste of death, because he has been forgotten by everyone but he does not have the luxury of being able to forget everyone else himself, so he lives knowing he is forgotten even before he dies, and no matter how hard he tries to forget everyone else, their memories are still with him. Although we know how Clare feels at this time and how much he hates it, we also know of the place he dreams to be. He 'longs for scenes where man has never trod/ A place where woman never smiled or wept'. This shows he wants to go somewhere where there is no creation and where no emotions are shown. In this way, no one will have to experience love so they can't lose. With no emotions, he is happier and at peace. He wants to abide with his God, 'and sleep as' he 'in childhood sweetly slept'. Here he uses repetition and sibilance. This gives a sweet, soft tone to the whole poem as he begins to move from the horrors of life to the sweet places he dreams to be. The poem has a somber tone and makes the reader see the world from Clare's perspective. ?? ?? ?? ?? Ayesha Mufti 10a English Coursework Sonnets ...read more.