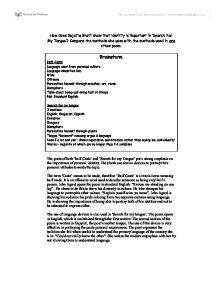 The poets of both half-Caste and Search for my Tongue put a strong emphasis on the importance of personal identity. They both use similar devices to portray their personal attitudes towards the topic.

How does Sujatta Bhatt show that identity is important in 'Search For My Tongue'? Compare the methods she uses with the methods used in one other poem. Brainstorm Half-Caste Language used from personal culture Language identifies him Pride Offense Personifies himself through weather, art, music Metaphors Talks about being and doing half of things Not Standard English Search for my tongue 3 sections English, Guajarati, English Isolation Imagery Metaphors Personifies herself through plants Tongue *keyword* meaning organ & language Uses I a lot and you - shows separation and distance rather than saying we, individuality Words - majority of which are no longer than 2-3 syllables The poets of both 'half-Caste' and 'Search for my Tongue' put a strong emphasis on the importance of personal identity. ...read more.

He is showing the importance of being able to portray both of his idetities and not to be ashamed to express either. The use of language devices is also used in 'Search for my tongue'. The poem opens in English, which is maintained through the first section. The second section of the poem is written in Gujurati, the poet's mother tongue. The use of this device is very effective in portraying the poets personal experiences. The poet expresses the isolation she felt when unable to understand the primary language of the country she is in: "Could not really know the other". She makes the readers empaphise with her by not allowing them to understand language. ...read more.

She then compares her language to a blossoming plant, comingback to her stronger than before. She is showing how important personal identity is by using negative words when she expresses isolation, then when she is showing herself regaining her mother tongue she uses strong and lively words. Both poems use the words "I" and "You" a lot. This shows seperation and distance in the different cultures of the poets. This essay achieves a B+. * You have effectively brainstormed a wide range of language points to support your response. * You consistently compare the two poems, focus in precise detail on language and address the question For an A grade, the essay needs: * A conclusion which explores the importance of culture * To avoid needless repetition. * To develop comment further ...read more.

This question asks it's candidate to study and compare the differences and similarities between two poems that gravitate around the central theme of the importance of identity. The candidate here has chosen 'Search For My Tongue' (SFMT) and 'Half-Caste' (HC). ...

This question asks it's candidate to study and compare the differences and similarities between two poems that gravitate around the central theme of the importance of identity. The candidate here has chosen 'Search For My Tongue' (SFMT) and 'Half-Caste' (HC). Their response is very well focused throughout the essay, and refers consistently to a plan they made before beginning their answer. Plans are an excellent investment in time if you are worried that all the ideas swarming into your mind after reading the question will be forgotten by he time you finish making your first point, and this helps because you won't have to stop every ten minutes to think of something new to say as you will have written prompts in shorthand in your plan. However sometimes, if the plans are to lengthy, the answer can be a little short to fully cover all that is required for poems of such lengths (particularly SFMT), so to exercise writing a concise plan before doing the same for the answer is a useful skill that should be practised.

The Level of Analysis is fairly basic here. The candidate has done well to make sure all points of cohesive and relevant to the question proposed, but there is no real insight given. It feels like a lot of information has been regurgitated from a teacher. This is answers the question fine enough, but to achieve the highest marks candidates should show individual response and an enthusiastic flair in the way they write. A personal response isn't always necessary, but to drop in phrases that suggest external, individual research has been carried out will do wonders for the candidates' marks. This candidate has partially achieved this almost immediately - their first point, in fact - however, it is erroneous. "Caste" is not a verb and does not mean "to be made [or fabricated, or constructed]". Caste derives from Latin and has a literal translation as "pure". Thus, the term "half-caste" can be criticised for suggesting those of a different racial background to White British are only half pure. This is what Agard was lampooning in his poem, and he mocks it as illogical to simply alienate one half of his heritage (as noted by the candidate - "He is showing the importance of being able to portray both of his ide[n]tities and not to be ashamed to express either.")
The analysis of SFMT is much stronger. There is an appropriate selection of quotes from the poem and their is an accurate recognition of why Bhatt believes her identity important. There could be, perhaps, a little more focus into how the poets mocks us, the readers, and put us in their shoes. The candidate touches upon this point briefly ("She makes the readers empaphise with her by not allowing them to understand [her] language"). But it doesn't feel fully explored. The poets were afraid that they would have to forget their natural identity and, when coming to Britain, felt alienated as they could not express themselves properly for fear of discrimination, and so are placing the readers at the disadvantage they had - Agard through his use of phonetic spelling, and Bhatt through her use of Gujarati. Neglecting to comment on how the poems effect the reader lost this candidate marks which, as shown above, are fairly easy to obtain.
One major irk with this essay is the lack of conclusion, and this seems to hint at the fact that candidate spent too long planning, and this is why simply choosing to do a plan doesn't always work. Writing a plan must be quick and efficient, and not take longer that 5 minutes or you will lose valuable exam/practice time. Instead of a conclusion, there are the telling signs of a new point about to be made, but it has been cut off presumably for time issues. This is by no means a bad thing, but a without a conclusion there is no real sense of a holistic understanding of the difference and similarities between the poems.

The Quality of Written Communication is below average. There are moments where the wrong word has been used (though not so badly that the explanations become confusing to read) such as the use of nonsense word "empaphise" which should be "empathise". As well as this there are minor typing errors which could easily be spotted and rectified will a spell-checker. And I can't stress this enough, but the title of poems, unless printed in teh AQA Anthology in some other format, must have all words in the title capitalised. "half-Caste" should not be written as such, more rather "Half-Caste".