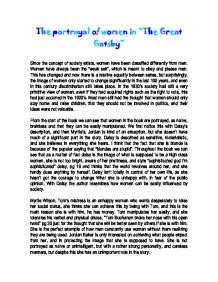 The portrayal of women in

The portrayal of women in "The Great Gatsby" Since the concept of society exists, women have been classified differently from men. Women have always been the "weak sex", which is meant to obey and please men. This has changed and now there is a relative equality between sexes, but surprisingly, the image of women only started to change significantly in the last 100 years, and even in this century discrimination still takes place. In the 1930's society had still a very primitive view of women, even if they had acquired rights such as the right to vote, this had just occurred in the 1920's. Most men still had the thought that women should only stay home and raise children, that they should not be involved in politics, and their ideas were not valuable. From the start of the book we can see that women in the book are portrayed, as na�ve, brainless and that they can be easily manipulated. ...read more.

She is not portrayed as na�ve or unintelligent, but with a rather strong personality, and careless manners, but despite this she has an unimportant role in the story. These three women, have very stereotypical characters, not too complex personalities, and defined characteristics. They are very different from each other but at the same time they share 3 main characteristics that can bee seen throughout the book The first one is materialism, Jordan, Daisy and Myrtle all care too much about their image on society, their material possessions, and are not true to their own feelings, they have an idea of how they should behave, and even think, and they try to stick loyal to this idea they have created of themselves. If we take Daisy as an example, she talks about her daughter and says" I'm glad she's a girl, and I hope she'll be a fool, that's the best thing a girl can be in this world, a beautiful little fool" pg 18, she has this idea about what women should be, and she has no desire to change this. ...read more.

In "The Great Gatsby", women are not described deeply, when their description is given the author appeals to their voice, their looks and the way they act rather than to their feelings or emotions. By giving such superficial information about them the reader gets the idea that they are foolish, and not too bright. Neither of them has a really important role in the plot, or is fundamental in crucial times of the story. They don't participate with ideas. Daisy is Gatsby's dream, for all he lives and she is portrayed as an "unreachable jewel" almost as an object, something that does not exist, and will never be reached. Definitely women have a secondary role in the book, the narrator is a man, important phrases are said by a man, and It's men who are described deeply, the whole story spins around them. In the 1930's it was a common idea to think women had a secondary l role in life, maybe F. Scott Fitzgerald had this ideology, or he was trying to reflect society as accurately as possible, and for this reason he put women on a second plan. ...read more.