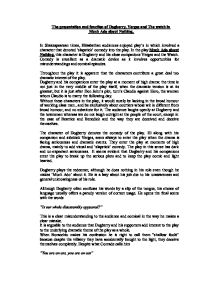 The presentation and function of Dogberry, Verges and The watch in Much A do about Nothing.

The presentation and function of Dogberry, Verges and The watch in Much Ado about Nothing. In Shakespearean times, Elizabethan audiences enjoyed play's in which involved a character that denoted 'slapstick' comedy into the play. In the play Much Ado about Nothing, this character is Dogberry and his close companions Verges and the Watch. Comedy is excellent as a dramatic device as it involves opportunities for misunderstandings and comical episodes. Throughout the play it is apparent that the characters contribute a great deal too dramatic interest of the play. Dogberry and his companions enter the play at a moment of high drama: the time is not just in the very middle of the play itself, when the dramatic tension is at its greatest, but it is just after Don John's plot, turn's Claudio against Hero, the woman whom Claudio is to marry the following day. Without these characters in the play, it would surely be lacking in the broad humour of working class men , and be exclusively about courtiers whose wit is different from broad humour, and no substitute for it. The audience laughs openly at Dogberry and the townsmen whereas we do not laugh outright at the people of the court, except in the case of Beatrice and Benedick and the way they are deceived and deceive themselves. The character of Dogberry denotes the comedy of the play. ...read more.

In, the play the function of the Watch is to police the island and provide a safe haven for its residents. This is ironic due to the way they perform there tasks so badly. The language used throughout the play by Dogberry and the other's help to add to the dramatic interest of the play. The audience laughs at Dogberry and Verges because they feel the need to copy the style of the court, and do it very badly in a way which humours the audience. They are long-winded, and they misuse word so much that in places they use one which is the opposite of what they intended to say e.g. "plaintiff" when they meant defendant. Dogberry's character, a minor role in the play, is authoritarian even though he lacks the ability to make himself understood. From the beginning he is prone to the kind of digression that expresses its own sense of self-importance, and he has occasionally to be promoted by his colleague Verges, who is invariably far more direct than he is. "Well, give them their charge, neighbour, Dogberry" III.3.8. And yet it is in the hands of the constable and his Watch that the safety of the inhabitants of Messina rest. If Leanoto's capacity for being de3cieved gives tha audience little confidence in the rational process of Law in Messina, then, surely, we have even greater qualms when we consider the responsibility and the limited ability of the Watch. ...read more.

Dogberry indulges in the kind of witless banter he describes and so ends up patronising himself. Despite sometimes getting things particularly right he tends to set up, unwittingly, the possibilities for alternative realings. He tries to explain the Watch's duties to them... Dogberry "you are thought here...stand in the prince's name" 2nd Watchman "How if a will not stand?" Dogberry "Why, then, take no note of him.. Thank God to be rid of a knave." In Dogberry's speech he misuses the word stand. In familiar Elizabethan slang a stand is slang for a male errection , so Dogberry is UN intentilly telling the watch to go around telling men to have errection's and that it was the governors policy. He is also offering a comic variation on the plays title: Sex, may be Much Ado about Nothing. If a man fails to stand as there will be nothing to note. What makes this funny is the fact it is Dogberry, householder of the community, who provides the audience with his opportunity for coarse laughter. Most of What Dogberry, asks, says or does is to be taken down, fails in to the category of utterly useless information. In conclusion to the play and its most comic characters, Dogberry is the main, 'slapstick' comic of the play. His foolishness and stupidity leads the other's into misfortune. The play, as a whole, really is much ado about nothing. ...read more.