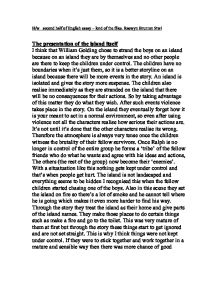 H/w second half of English essay - lord of the flies. Raewyn Brunton 9twi The presentation of the island itself I think that William Golding chose to strand the boys on an island because on an island they are by themselves and no other people are there to keep the children under control. The children have no boundaries when it's just them, so it is a better storyline on an island because there will be more events in the story. An island is isolated and gives the story more suspense. The children also realise immediately as they are stranded on the island that there will be no consequences for their actions. ...read more.

The island is not landscaped and everything seems to be hidden I recognised this when the fellow children started chasing one of the boys. Also in this scene they set the island on fire so there's a lot of smoke and he cannot tell where he is going which makes it even more harder to find his way. Through the story they treat the island as their home and give parts of the island names. They make those places to do certain things such as make a fire and go to the toilet. This was very mature of them at first but through the story these things start to get ignored and are not set straight. ...read more.

That's why Golding made it so that it was children and no adults because things would have got sorted out too quickly if there were adults there, there would have been no story. Overall I think that the story was quite good but could have been made better in some cases. Such as the way they acted with each other was not totally realistic in some scenes, e.g. the murder scene; in real life I think that they would not have had the reaction they had and not just have denied what they did as an 'accident'. This blatantly shows that the boys eventually knew that what they had done was wrong but just didn't want to admit to it so that when they got rescued they would not have got in trouble. Also because they didn't want to admit it to themselves, because they're only young. ...read more.