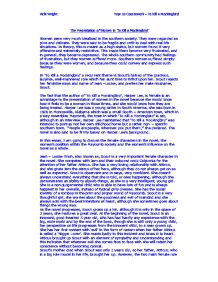 The Presentation of Women in 'To Kill a Mockingbird' Women were very much idealised in the southern society. They were regarded as pure and delicate. They were said to be fragile and unfit to deal with real life situations. In theory, this is meant as a high status, but women found it very offensive and extremely restrictive. This made them become very frustrated, and in general, they became depressed. The whole southern community had feelings of frustration, but they women suffered more. Southern women suffered simply because they were women, and because they could convey and express such feelings. In 'To Kill a Mockingbird' a recurrent theme is Scout's hatred of the gracious, ladylike, well-mannered role which her aunt tries to inflict upon her. Scout rejects her feminine ways and name of Jean -Louise, and prefers her male nickname, Scout. The fact that the author of 'To Kill a Mockingbird', Harper Lee, is female is an advantage to the presentation of women in the novel because she would know how it feels to be a woman in those times, and she would know how they are being treated. Harper Lee was a young writer in South America, she was born in 1926 in Monroeville, Alabama which was a small South - American town, which in a way resembles Maycomb, the town in which 'To Kill a Mockingbird' is set, although in an interview, Harper Lee maintained that 'To Kill a Mockingbird' was intended to portray not her own childhood home but a rather non - specific southern town. ...read more.

In a way, I think that Scout and Jem both admire her. She is a very positive character in the novel and a big role model. She is very courageous and has a good, fun sense of humour. She has a non - racist attitude, which Scout, especially admires. You can tell that she isn't racist as she stands by Atticus through the Tom Robinson case. I think that Miss Maudie gets along with everyone or at least tries too. She has an amount of respect for all living things. Scout has a very high opinion of Miss Maudie, as said before; she is one of Scout's main role models. She has a lot of wisdom about her, which helps Scout a lot through the novel. She is a mother-like figure to the children, she does not talk down to them, she has respect for them, which is why they respect and value her. She a constant reassuring and sensible model for the children when Atticus is not around. When her house burns down, she shows a tremendous amount of strength and resilience. Miss Maudie and the children often have very in-depth conversations together about what Arthur Radley was like when he grew up, rigid religion and of Atticus' talent. Scout and Miss Maudie are in a way, very alike. They have the same views on life, which is why I think they get along so well, even though Scout is only young. ...read more.

She tries to enforce these views on Scout, which drives Scout away from her, as Scout is happy the way she is and the way she dresses. Alexandra is very much concerned with bringing up Atticus' children 'properly', this shows when she comes to help look after the children during the Tom Robinson trials. She is quite a racist woman, which does not help when she is staying with Atticus and the children, as Calpurnia is the cook. She has very different views to Calpurnia on bringing up the children and the roles of southern women. This makes it quite hard for them to live in the same household and causes them a lot of tension, as they tend to clash, as they are very different. Scout and Aunt Alexandra build a better relationship towards the end of the novel, they realise they aren't so different after all, and rather learn to get along. They learn to live with each other and accept each other's rules and views. I think that there are many strong female characters in 'To Kill a Mockingbird'. One of the strongest being Scout. She changes a lot through the novel, we get to know her really well, and notice her changes from a 'small child into more of a person'. The role of southern women is a big aspect of the story. It is shown in many ways, from the way Calpurnia is, and the way Aunt Alexandra is. ?? ?? ?? ?? Vicki Wright Year 10 Coursework - To Kill A Mockingbird ...read more.