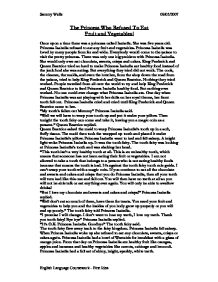 The Princess Who Refused To Eat Fruit and Vegetables!

The Princess Who Refused To Eat Fruit and Vegetables! Once upon a time there was a princess called Isabella. She was five years old. Princess Isabella refused to eat any fruit and vegetables. Princess Isabella was loved by many people from far and wide. Everybody would come to the palace to visit the pretty princess. There was only one big problem with Princess Isabella. She would only ever eat chocolate, sweets, crisps and cakes. King Frederick and Queen Beatrice tried so hard to make Princess Isabella eat healthy food instead of the junk food she was eating. But everything they tried did not work. ...read more.