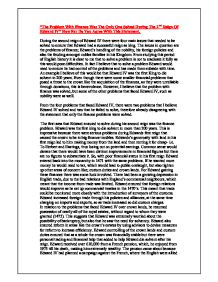 &quot;The Problem With Finance Was The Only One Solved During The 2nd Reign Of Edward IV&quot; How Far Do You Agree With This Statement.

"The Problem With Finance Was The Only One Solved During The 2nd Reign Of Edward IV" How Far Do You Agree With This Statement. During the second reign of Edward IV there were four main issues that needed to be solved to ensure that Edward had a successful reign as king. The issues in question are the problems of finance; Edward's handling of the nobility, his foreign policies and also the feuding amongst nobles families in his Kingdom. From studying this period of English history it is clear to me that to solve a problem is not to eradicate it fully as this would pose difficulties. In fact I believe that to solve a problem Edward would need to ensure he had control of the problems and has made them subside with time. An example I believe of this would be that Edward IV was the first King to die solvent in 200 years. Even though there were some smaller financial problems that posed a threat to the crown like the acquisition of the finances, as they were unreliable through donations, this is benevolence. ...read more.

Edward increased foreign trade through his policies and alliances, at the same time charging on imports and exports, so as trade increased so did custom charges. In relation to the problems that faced Edward IV over crown lands, he resumed possession of nearly all of the royal estates, without regard to whom they were granted (1475). This suggests that Edward was extremely worried about the possibility of bankruptcy, but also that he saw the need for solvency. Edward also ensured reform in areas like the crown's estates by using advisors to devise measures for reform to increase efficiency. Edward controlling of the crown lands and custom duties ensured that as a whole the crown was financially stable but there were personal trading and financial help that added to help Edward die solvent after his reign. Edward received over �10,000 from a French pension, which, he enjoyed from 1975 till his death, making him extremely wealthy. The pension came about because Edward IV had planned a campaign against the French, where the English were allied with the Spanish and the Burgundians. ...read more.

That Edward was fair with his patronage ensured support for him both amongst his own nobility, but also amongst Lancastrian nobility as he distributed patronage justly. Edward rewarded loyalty amongst the nobility with patronage. This means that Edward could use patronage as a goal for nobles to ensure that they behave with loyalty. Edward tactfully ensured less chance of noble feuds, as he made certain that obedience was met amongst the nobility, as the reward was clear, patronage. Edward can be seen as a traditional king whose attitude to his nobility reflected the fact that he had once been one of their number. I believe that Edward IV during his second reign definitely solved the growing problem of financial issues, and ended up dieing solvent. Also I believe that at such a controversial time in English history, where feudal relations were weak due to the readeption, Edward ensured that relations stayed as conservative as possible through his fair and equal distribution of patronage. Edward solved the two issues of finance and also the nobility. Therefore he solved more than one problem during his reign, more than just solvency. ...read more.