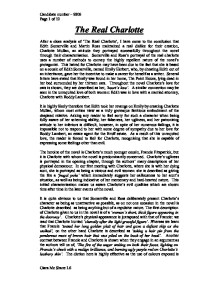 The Real Charlotte After a close analysis of 'The Real Charlotte', I have come to the conclusion that Edith Somerville and Martin Ross maintained a real dislike for their creation, Charlotte Mullan, an attitude they portrayed successfully throughout the novel through their characterisation. Somerville and Ross's portrayal of the real charlotte uses a number of methods to convey the highly repellent nature of the novel's protagonist. This hatred for Charlotte may have been due to the fact that she is based on a cousin of Edith Somerville, named Emily Herbert, who, by cheating Edith out of an inheritance, gave her the incentive to make a career for herself as a writer. Several letters have stated that Emily was found in her home, The Point House, lying dead in her bed surrounded by her thirteen cats. Throughout the novel Charlotte's love for cats is shown, they are described as her, 'heart's love'. A similar connection may be seen in the unrequited love of both women: Edith was in love with a married attorney, Charlotte with Roddy Lambert. It is highly likely therefore that Edith took her revenge on Emily by creating Charlotte Mullan, whom most critics view as a truly grotesque fictitious embodiment of the despised relative. Asking any reader to feel sorry for such a character when being fully aware of her scheming ability, her falseness, her ugliness, and her patronizing attitude to her inferiors is difficult, however, in spite of her numerous failings, it is impossible not to respond to her with some degree of sympathy due to her love for Roddy Lambert, an estate agent for the Bruff estate. As a result of this unrequited love, the reader is forced to feel for Charlotte, recognising that she is capable of expressing some feelings other than evil. The heroine of the novel is Charlotte's much younger cousin, Francie Fitzpatrick, but it is Charlotte with whom the novel is predominantly concerned. ...read more.

Her motive is made evident to us by Norry the Boat, when she tells Julia that, 'I'll tell you what she's after it for, it's to go live in, and let on she's as grand as the other ladies in the country'. Lucy Lambert's death is deliberate, as Charlotte does not assist her. When Roddy begins to sort out his wife's belongings, the authors describe 'her [Charlottes] voice treading eagerly upon the heels of his: 'it is that you want me to help you with'. Charlotte sees this as an opportunity to enlarge her wardrobe with Lucy's clothes. Charlotte's revenge on Roddy is also seen as a success when Francie is killed. Charlotte's role-playing succeeds in fooling the high-ranking individuals of Lismoyle society, with Christopher as an exception. Charlotte's father was employed by Sir Benjamin Dysart as landlord of sub-letted land which means that she already has a connection with the Dysarts. Charlotte uses this association to form a friendship, but the authorial comments are a constant reminder to the reader of Charlotte's origins in the native Irish. This distinction between the two classes is made through the language used by the authors. The dialogue used is reproduced phonetically. The range of speaking voices used by Charlotte shows the diversity of society and the boundaries between classes. Charlotte's role-playing is shown at its best at Lady Dysart's lawn tennis party where Charlotte begins by, 'wearing her company smile'. It becomes quite obvious to us that she desperately wants to be associated with the Dysarts, as John Cronin states: "We watch Charlotte as she laboriously claws her way up the social ladder by every means at her disposal". In order to do this, she suits every situation with a different face. At this party she speaks, 'with marked politeness, as all trade of combat had left her manner, and the smile with which she greeted him, (Christopher) ...read more.

At this point the fact that neither Charlotte or Roddy are aware that Francie is dead makes this scene all the more dramatic, as we later find out that Charlotte has an opportunity to marry Roddy, and nether are aware that Roddy has been pardoned by Christopher. In actual fact, Roddy has no reason to be at Guthlamuckla at all. Although Charlotte is certain in her ways about achieving revenge, when Roddy arrives at the farm, we realise that Charlotte still has a certain degree of feeling for him as 'she unpinned her skirt and fastened up the end of a plait that had escaped from the massive coils at the back of her head'. These feelings, however, do not deter her from taking revenge. At the climax of the novel, Charlotte is finally unmasked as the person who caused Roddy's downfall. Therefore the destruction of Charlotte's fa�ade at this point is extremely ironic. Hilary Robinson says of this, that, 'There is no need for narrative comment, the sharp irony says it all, and lifts the novel above the pathos of Francie's death'. In view of all the events of the novel, pity is certainly not the first emotion that comes to mind when the character of Charlotte Mullan is presented to us. Yet Charlotte is, in my opinion, deserving of our pity. She did not ask to fall in love with Roddy, hence the pain and suffering which she endures on this account do remind us of her human qualities and we do feel sympathy towards her. Somerville and Ross remind us that faults in Charlotte's character have come about through her repulsiveness and the fact that this is a constant reminder to her everyday life, with the failure of her as a women being shown in her masculine traits. Overall, although her deeds are despicable, I feel that there are aspects of the novel where Charlotte is indeed deserving of our pity. ?? ?? ?? ?? Candidate number - 9306 Page 1 of 12 Ciara Mc Shane L6 ...read more.