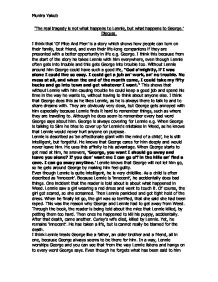 'The real tragedy is not what happens to Lennie, but what happens to George.' Discuss. I think that 'Of Mice And Men' is a story which shows how people can turn on their family, best friend, and even their life-long companions if they are presented with a better opportunity in life e.g. George. I think this because from the start of the story he takes Lennie with him everywhere, even though Lennie often gets into trouble and this gets George into trouble too. Without Lennie around him George could have such a good life, "God a'mightly, if I was alone I could live so easy. I could get a job an' work, an' no trouble. No mess at all, and when the end of the month come, I could take my fifty bucks and go into town and get whatever I want." This shows that without Lennie with him causing trouble he could keep a good job and spend his time in the way he wants to, without having to think about anyone else. ...read more.

Even though Lennie is quite intelligent, he is very childlike. As a child is often described as 'innocent'. Because Lennie is 'innocent', he accidentally does bad things. One incident that the reader is told about is about what happened in Weed. Lennie saw a girl wearing a red dress and went to touch it. Of course, the girl got scared, so she screamed. Then Lennie panicked and got tight hold of the dress. When he finally let go, the girl was so terrified, that she said she had been raped. This was the reason why George and Lennie had to get away from Weed. Through the book, the reader is being told about the mice that Lennie killed, by petting them too hard. Then once he happened to kill his puppy, accidentally. After that death, came another. Curley's wife died, killed by Lennie. Yet, he remains 'innocent'. He has taken a life, but is cannot really be blamed for the death. I think Lennie treats George like a father, an older brother and a friend, all in one, because George always seems to be there for him. ...read more.

'Let's have different colour rabbits, George,'. When George talks about this dream his face lights up and he really enjoys seeing Lennie happy and even though George is stuck with Lennie, he still likes having him there. I think the killing of Candy's dog is similar to the killing of Lennie. The way that Candy saw it is that he is not hurting anyone and that there is no reason to have to end his dog's life in misery. Even though Candy loves his dog more than anything else in the world he chose to let someone shoot his dog in the back of the head. George shot Lennie himself as he knew that he had to kill him. I think that the reason partly for this is because George knows that Lennie will be shot any way, but if he did it, it would be out of love and protection, and not revenge and hatred. George also knows that he cannot go on with Lennie, always running away from some kind of trouble that Lennie has caused. I think the dream that they shared made it harder for George to shoot Lennie. Munira Yakub ...read more.