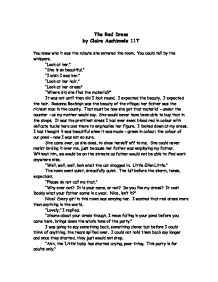 The Red Dress by Claire Auchinvole 11T You knew who it was the minute she entered the room. You could tell by the whispers. "Look at her." "She is so beautiful." "I wish I was her." "Look at her hair." "Look at her dress!" "Where did she find the material?" It was not until then did I look round. I expected the beauty. I expected the hair. Rosanna Bexleigh was the beauty of the village; her father was the richest man in the county. That must be how she got that material - under the counter - as my mother would say. She would never have been able to buy that in the shops. It was the prettiest dress I had ever seen: blood red in colour with delicate tucks here and there to emphasise her figure. I looked down at my dress. I had thought it was beautiful when it was made - green in colour; the colour of our pond - now I was not so sure. ...read more.

I could not hold them back any longer and once they started, they just would not stop. "Ahh, the 'Little' baby has started crying, poor thing. This party is for adults only." That was it. My evening was already ruined so there was not much point staying. I hated Rosanna so much; she could always spoil a good party. She always had lots of money so her father could afford all her pretty things. It was so unfair! I stormed out and headed for the nearest bus stop, my mother was coming to collect me in an hour or so. I could catch the bus home before she started out. As I waited for the bus, I started plotting my revenge. I wanted that dress so badly, but more than that, I wanted Rosanna not to have it. She did not deserve it. She did not have to cook, clean and look after a baby brother; she had a maid and the family had a chef, a couple of house cleaners and a butler. ...read more.

It rattled and banged as I got off and I watched it fade into the desolate blackness, listening for the sound to fade with it. Finally, it stopped, "pfut", and there was complete silence. So silent, not even the rustle of wind in the trees or of owls hooting. So silent I could hear my heart beating. Something dropped from the sky. I stopped listening to nothing and started running, running for my life. No good. I fell and saw my hands before me, I thought of my family and how much I was needed, loved. The red dress seemed insignificant now, except it wasn't: if Rosanna had not worn that dress, I would not have ended up leaving the party early and I would still be safe in the hall - not here on the grass. By the light of the flames, I looked down and saw my dress; I could just make out a dark stain, spreading across it. Dark, blood red. I thought of the irony: my red dress had found me - my envy had been my enemy. ...read more.