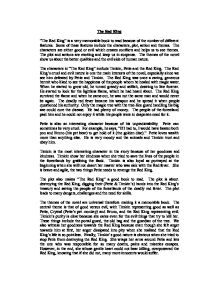 The Red King "The Red King" is a very memorable book to read because of the number of different features. Some of these features include the characters, plot, action and themes. The characters are either good or evil which creates conflicts and helps us to see themes. The plot and actions are exciting and keep us in suspense. The themes of the novel show us about the better qualities and the evil side of human nature. The characters in "The Red King" include Timkin, Petie and the Red King. The Red King's cruel and evil nature is one the main interests of the novel, especially since we see him defeated by Petie and Timkin. ...read more.

Petie is also an interesting character because of his unpredictability. Petie can sometimes be very cruel. For example, he says, "If I had to, I would have beaten both you and Bruno (his pet bear) to get hold of it (the golden disc)." Petie loves wealth more than anything else. He is very moody and the animals and Timkin trust and obey him. Timkin is the most interesting character in the story because of her goodness and kindness. Timkin show her kindness when she tried to save the lives of the people in the forestlands by grabbing the flask. Timkin is also loyal as portrayed at the beginning when she will not desert her master who was sick with the Red fever. ...read more.

and Bruno, and the Red King representing evil. Timkin's purity is clear because she cares even for the evil things that try to kill her. These things include the portal guard, the old hag and the guardian of the tree. We also witness her goodness towards the Red King because even though she felt anger towards him at first, her anger dissipated into pity when she realized that the Red King's life is so pointless. Finally, Timkin's good nature is obvious when she tried to stop Petie from destroying the Red King. She wraps her arms around Petie and lets the one who was responsible for so many deaths, pains and miseries escapes. However, in the end, she whose gentle heart could not bear killing, overpowered the Red King, knowing that if she did not, many more innocents would suffer. ...read more.