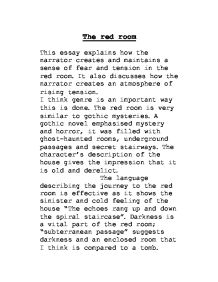 The red room This essay explains how the narrator creates and maintains a sense of fear and tension in the red room. It also discusses how the narrator creates an atmosphere of rising tension. I think genre is an important way this is done. The red room is very similar to gothic mysteries. A gothic novel emphasised mystery and horror, it was filled with ghost-haunted rooms, underground passages and secret stairways. The character's description of the house gives the impression that it is old and derelict. The language describing the journey to the red room is effective as it shows the sinister and cold feeling of the house "The echoes rang up and down the spiral staircase". ...read more.

The opening is significant as it shows how the story is structured to create and sustain suspense. The way the characters are portrayed at the beginning, gives an inkling of what the story is about, caretaker 1is described "the man with the withered arm" this implies the caretaker is noticeably disturbing. Caretaker 2 is described as an elderly man "more bent, more wrinkled, more aged even than the first". The old woman "her pale eyes wide open" gives the impression that the lady is eerie. The characters warnings about the red room "the likes of this house" and "this night of all nights!" tells the reader that there is something unusual about the house and that the red room is more than just a typical room. ...read more.

Darkness is contrasted by daylight at the end; this brings a content ending to a very mysterious story. Setting is very important to the story; the red room has a typical classical setting for gothic and Victorian ghost stories. Gloominess suggested by cold and dark contribute to the atmosphere of oppression and neglect. The language and style in the red room is typical Victorian. The language suggests atmosphere and is packed full of verbs which gives excitement to the action-packed scenes. Atmosphere is suggested by structure and action but especially by the author's choice of language. The vocabulary and imagery used, is a tremendous effect on creating the atmosphere, this is shown when the author is describing people with words such as "withered arm", "pale eyes" and "monstrous shadow". ...read more.