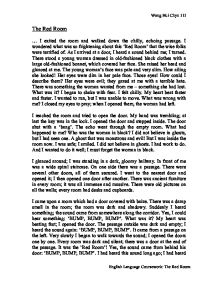 The Red Room ... I exited the room and walked down the chilly, echoing passage. I wondered what was so frightening about this 'Red Room' that the wise folks were terrified of. As I arrived at a door, I heard a sound behind me; I turned. There stood a young woman dressed in old-fashioned black clothes with a large old-fashioned bonnet, which covered her face. She raised her head and glanced at me. The young woman's face was pale and very slim. How ailing she looked! Her eyes were dim in her pale face. Those eyes! How could I describe them? Her eyes were evil; they gazed at me with a terrible hate. There was something the woman wanted from me - something she had lost. What was it? I began to shake with fear. I felt chilly. My heart beat faster and faster. I wanted to run, but I was unable to move. What was wrong with me? I closed my eyes to pray; when I opened them, the woman had left. ...read more.

There were old pictures on all the walls; every room had desks and cupboards. I came upon a room which had a door covered with baize. There was a damp smell in the room; the room was dark and shadowy. Suddenly I heard something; the sound came from somewhere along the corridor. Yes, I could hear something: 'BUMP, BUMP, BUMP'. What was it? My heart was beating fast; I opened the door. The passage outside was dark and empty; I heard the sound again: 'BUMP, BUMP, BUMP'. It came from a passage on the left. Very slowly I began to walk towards the sound; I opened the doors one by one. Every room was dark and silent; there was a door at the end of the passage. It was the 'Red Room'! Yes, the sound came from behind his door: 'BUMP, BUMP, BUMP'. I had heard this sound long ago; I had heard it when I was a child. What was it? ...read more.

There was a small bed in one corner. A tall rocking chair stood in front of the fireplace. The chair was rocking gently; but there was no one there; the room was empty. No one had passed me in the corridor; there was no other door. The windows were shut; there were two wooden bars across them. The chair stopped moving; there was complete silence. The 'Red Room' was clean and tidy; there were sheets and pillows on the bed. I opened a chest and a cupboard; they were both full of clothes. Clothes for a boy of six or seven, these were beautifully made, but they were old-fashioned clothes. The room was full of children's toys. They were neat and tidy, and there was no dust on them at all. There were toy soldiers and a sailing boat, there were games, paint and books, all things that little boys love. They had been here for 60 years, but everything was neat, tidy and clean. There was nothing frightening in this room, only a feeling of sadness - a feeling of something lost. I felt sad, extremely sad. Wong Hui Chyn 11I English Language Coursework: The Red Room ...read more.