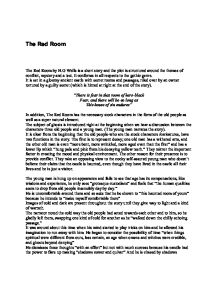 The Red Room The Red Room by H.G Wells is a short story and the plot is structured around the themes of conflict, mystery and a test. It conforms in all respects to the gothic genre. It is set in a gloomy ancient castle with secret rooms and passages, riled over by an owner tortured by a guilty secret (which is hinted at right at the end of the story). "There is fear in that room of hers-black Fear, and there will be-so long as This house of sin endures" In addition, The Red Room has the necessary stock characters in the form of the old people as well as a super natural element. The subject of ghosts is introduced right at the beginning when we hear a discussion between the characters-three old people and a young man. (The young man narrates the story). It is clear from the beginning that the old people-who are the stock characters /caricatures, have two functions in the story. ...read more.

The narrator noted the cold way the old people had acted towards each other and to him, so he gladly left them, swapping one kind of cold for another as he "walked down the chilly echoing passage." It was around about this time when his mind started to play tricks on him and he allowed his imagination to run away with him. He began to consider the possibility of time "when things spiritual were different from ours, less certain, an age when omens and witches were credible, and ghosts beyond denying" He dismisses these thoughts "with an effort" but not with much success because his candle had the power to flare up making "shadows cower and quiver" And he is chased by shadows "a shadow came sweeping up After me" (pg 45) He also imagines a resulting sound but convinces himself that there is only silence. There are a few examples of this kind, which turn out to be red herrings and are there to challenge the expectations of the reader. ...read more.

Not surprisingly he now finds himself "almost frantic with the horror of the coming darkness." Before long he'd lost all reason. "an invisible hand seemed to sweep out the two candles on the table." And then he imagines the shadows to be personified and able to creep "in upon me, first a step gained on this side of me and then on that." When the last of the light faded he says amongst other things that the darkness "crushed the last vestiges of reason from my brain." Clearly the battle of wills he waged has been lost to an intangible force. By the end of the story the narrator has satisfied himself that the room isn't haunted but has learnt a lot more than that. He has gained some much-needed humility and regards the old people with more respect then he did at the beginning and they too are less hostile towards him. He says the old man spoke no longer as one who greets an intruder, but for one who grieves for a broken friend. There is no hint of his previous disgust at their senility. ...read more.