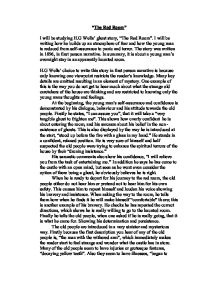 "The Red Room" I will be studying H.G Wells' ghost story, "The Red Room". I will be writing how he builds up an atmosphere of fear and how the young man is reduced from self-assurance to panic and terror. The story was written in 1896, in first person narrative. In summary, it is about a young man's overnight stay in an apparently haunted room. H.G Wells' choice to write this story in first person narrative is because only knowing one viewpoint restricts the reader's knowledge. Many key details are omitted resulting in an element of mystery. One example of this is the way you do not get to hear much about what the strange old caretakers of the house are thinking and are restricted to knowing only the young mans thoughts and feelings. At the beginning, the young man's self-assurance and confidence is demonstrated by his dialogue, behaviour and his attitude towards the old people. Firstly he states, "I can assure you", that it will take a "very tangible ghost to frighten me". This shows how overly confidant he is about entering the room, and his sarcasm about his belief in the non-existence of ghosts. This is also displayed by the way he is introduced at the start, "stood up before the fire with a glass in my hand." ...read more.

The author builds up tension by just the fact there is a young man away from any other people in a haunted room in a castle at night. The man seems to be put off because "everything was in its place," with all the "candles in the sockets of the sconces." This is clearly strange because you would expect things to be a bit less perfect in a haunted castle. The dust must have been spread extremely evenly as it seemed to be invisible in the moonlight upon the carpets and polished floors. This all seems out of place, you would not expect it not to have been seen for some time, gathering dust. This contributes to the sinister atmosphere and building up of the supposedly supernatural surroundings. The man is made to seem more afraid now than in the beginning pages of the story as slowly he is being made to feel less certain of himself and more afraid, for instance the way he thinks someone is waiting to waylay him, when really it was only a statue. After this he says it restored his nerve, he admits he felt a sense of nervousness. The surroundings are slowly attacking his confidence and the fact he is talking to himself and admits he does not find the echoes pleasant reveals his fear. ...read more.

They talk a lot more than they first did at the start of the story, probably due to the fact they wanted to ask questions etc and tell him what happened and how he got there. There is a lot less tension in the atmosphere now mainly due to their respect for the young man and because it is now the morning. The man has learnt to not be so self-confident and to respect other people's views more than he used to. The old woman is no longer staring into a trance into the fire; the old people seem less ghostly and more human. It used to be he asking questions but now they are the one's asking him the questions, due to the fact he now has more knowledge of the Red Room than they do. I can conclude that the author H.G Wells is successful in building up an atmosphere of fear and reducing the young man from self-assurance to panic and terror. I think it is clever the way H.G. Wells used fear to haunt the room instead of maybe a ghost, this way it is more realistic. The young man walked in very self-confident and sure of himself, he left the castle as a better person, aware of his experience in the Red Room and more able to accept other people's thoughts and views. ...read more.