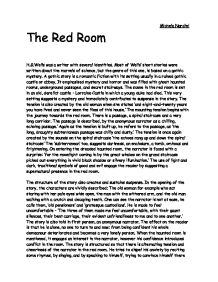 Michela Nardini The Red Room H.G.Wells was a writer with several identities. Most of Wells' short stories were written about the marvels of science, but the genre of this one, is based on a gothic mystery. A gothic story is a romantic fiction with its setting usually in a ruined gothic castle or abbey. It emphasised mystery and horror and was filled with ghost haunted rooms, underground passages, and secret stairways. The scene in the red room is set in an old, derelict castle - Lorraine Castle in which a young duke had died. This very setting suggests a mystery and immediately contributes to suspense in the story. The tension is also created by the old woman when she states `and eight-and-twenty years you have lived and never seen the likes of this house.' The mounting tension begins with the journey towards the red room. There is a passage, a spiral staircase and a very long corridor. The passage is described, by the anonymous narrator as a chilling, echoing passage.' ...read more.

He is made to feel uncomfortable - `The three of them made me feel uncomfortable, with their gaunt silences, their bent carriage, their evident unfriendliness to me and to one another.' The story is also told in first person, an anonymous narrator. The effect on the reader is that he is alone, no one to turn to and now; from being confident his whole demeanour deteriorates and becomes a very lonely person. When the haunted room is mentioned, it engages an interest in the narrator, however his confidence introduces conflict in the room. The story is structured so that there is alternating tension and cheeriness of the narrator in the red room. He tries to dispel his anxiety by reciting some rhymes, by singing, and by speaking to himself, trying to convince himself there were no ghosts `. I began to string some rhymes together.' This puts the reader at ease, yet at the same time the reader knows that tension is being created. On entry to the red room, he checks the room thoroughly and locks the door `...satisfying myself of the fastening of the door.' ...read more.

The repetitive uses of certain sentences `this night of all nights.' enhance this atmosphere and sustain the suspense. Also the repeated reference to the old peoples' fear, darkness and shadows is a subtle way by the author to maintain a certain tension in the story. The depth of the novel ultimately surfaces with H.G.Wells' use of imagery. The use of similes, metaphors and personification of darkness, light and fear all add doubt, mystery and suspense to the short story. The `little tongue of light' is one such example. He describes the darkness, and the effect it has on the narrator as `....closed upon me like the shutting of an eye.' And `...sealed my vision.' He is using sight as a major sensory object when it comes to darkness and fear. In order to preserve and sustain suspense and tension in the red room, H.G.Wells has used a variety of ways of maintaining this throughout the story. The type of genre, the structure of the story, its opening and ending. The setting which created the atmosphere of oppression and neglect, his choice of language and use of imagery. All these factors contributed to the creation of tension and suspense in the red room. ...read more.