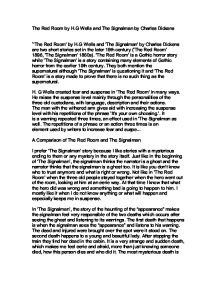 The Red Room by H.G Wells and The Signalman by Charles Dickens `'The Red Room' by H.G Wells and 'The Signalman' by Charles Dickens are two short stories set in the later 19th century ('The Red Room' 1896, 'The Signalman' 1860s). 'The Red Room' is a Gothic horror story while 'The Signalman' is a story containing many elements of Gothic horror from the earlier 19th century. They both mention the supernatural although 'The Signalman' is questioning it and 'The Red Room' is a story made to prove that there is no such thing as the supernatural. H. G Wells created fear and suspense in 'The Red Room' in many ways. He raises the suspense level mainly through the personalities of the three old custodians, with language, description and their actions. The man with the withered arm gives aid with increasing the suspense level with his repetitions of the phrase 'It's your own choosing.'. It is a warning repeated three times, an effect used in 'The Signalman as well. The repetitions of a phrase or an action three times is an element used by writers to increase fear and suspe... A Comparison of The Red Room and The Signalman I prefer 'The Signalman' story because I like stories with a mysterious ending to them or any mystery in the story itself. Just like in the beginning of 'The Signalman', the signalman thinks the narrator is a ghost and the narrator thinks that the signalman is a ghost too. It is like you don't know who to trust anymore and what is right or wrong. Not like in 'The Red Room' when the three old people stayed together when the hero went out of the room, looking at him at an eerie way. At that time I know that what the hero did was wrong and something bad is going to happen to him. I mostly like it when I do not know anything or what will happen and especially keeps me in suspense. ...read more.

The language of each story is typical of its time with words such as 'flambeaux' and 'stifling'. Both stories concentrate on death, and the setting of each story is based upon gothic elements which was the abandoned house described in the Red Room and in The Cask of Amontillado. The bones and deceased relatives of Montressor helps to add to the atmosphere and imagery. HG Wells builds up tension slowly to the climax, yet Edgar Allen Poe focuses on revenge and retribution and brings you right into the plot. Both writers explore different themes in their stories such as gothic genre. Gothic genre is a key issue in both stories. In The Cask of Amontillado they 'passed through a range of low arches, descended... at a deep crypt.' This gothic genre tells the reader what it was like. Also 'the foulness of the air caused our flambeaux rather to glow than flame.' This links to the Red Room as the fire was being engulfed by the darkness, and everything was 'surrounded in an ocean of mystery.' Also in the Red Room gothic genre is described by the interior of the Red Room in which the narrator was staying. He was checking for secret panels, and checking behind curtains, and under the bed, which also creates tension. The character creates a barricade, and lays his revolver down to reassure himself, and jokes about 'remind him not to trip over' the candles and old antique furniture. The Red Room is set in an old dilapidated manor house with other people such as the old woman, man with withered arm, himself, and man with shades. The setting is described as 'the castle and the deep toned, old fashioned furniture.' This shows the house is pre dated, and is not looked after very well. The place is complicated with so many rooms. 'Along the passage...come to a door... ...read more.

This tells us that there is less tension to the end of the story. But at the very end of The Red Room there is still fear 'So long as this house of sin endures.' The Characters have an eerie and mysterious manner. "This night of all nights, said the woman". The characters create tension, as you never now fully what they are talking about, we don't even know their or the narrators name. The narattor of this story is a person who wants to confront whatever lies within the red room, in an effort to uncover all the superstition that surrounds the room. In the first few lines we can see that the narrator is a confident and strong minded person, who is at the same time fair and, although in the room with the old people it is a difficult situation, he tries to be patient and polite to the other people. It shows he is confident in the first line when he says, "I can assure you that it will take a very tangible ghost to frighten me." He also seems very defiant when he stands up in front of the fire with his glass in his hand. Once the man with the withered arm is introduced an uneasy atmosphere takes over, he also creates mystery by making the reader wonder why he has a withered arm and whether it is anything to do with the red room. The man with the bad back is similar to the man with the withered arm by making the reader ask himself or herself how he got it and was it in the story he described how the red room is haunted but a young man does not believe it, in the end narrator discover that the red room is truly haunted. Firstly, to convey fear the writer described the surroundings very ghostly. The chilly, echoing passage described the environment is very dark, damp and cold. It creates fear, suspense and builds up tension. This passage is the beginning of growing fear of the young man. ...read more.