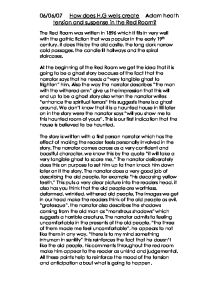 The Red Room was written in 1896 which it fits in very well with the gothic fiction that was popular in the early 19th century, it does this by the old castle, the long dark narrow cold passages, the candle lit hallways and the spiral staircases. At the beginning of the Red Room we get the idea that it is going to be a ghost story because of the fact that the narrator says that he needs a "very tangible ghost to frighten" him. Also the way the narrator describes "the man with the withered arm" give us the impression that this will end up to be a ghost story also when the narrator writes "enhance the spiritual terrors" this suggests there is a ghost around. We don't know that it is a haunted house in till later on in the story were the narrator says "will you show me to this haunted room of yours". This is our first indication that the house is believed to be haunted. The story is written with a first person narrator which has the effect of making the reader feels personally involved in the story. ...read more.

The journey to the red room is a very hellish journey, this is because of the way the narrator has described the castle, "the long, draughty, subterranean passage was chilly and dusty" and the build up of tension as he is travelling through the castle. In the red room itself the narrator does many different thinks to comfort him during his time in the red room like lighting all the candles in the room so no shadows are there, lighting the fire and even talking to himself, these method did not work because when he spoke to himself the echoes were not pleasant for him so he stopped "A few I spoke aloud, but the echoes were not pleasant." The narrator kept a revolver by his side ready to hand at all times to reassure himself that he was safe. Later on in the red room the narrator starts to feels better about being in the red room "very cheery and reassuring in these little streaming flames," the narrator then uses metaphors to create tension and suspense by describing the wind like a ghost, "an invisible hand seemed to sweep out the two candles on the table." ...read more.

The language used in the story is very typical for its time "eight-and-twenty years" the narrator uses lots of metaphors and similes during the story, "a shadow came sweeping up after me, and one fled before me into the darkness overhead" and "it was like a ragged storm cloud sweeping out the coming darkness" and "an invisible hand seemed to sweep out the to candles on the table" these are all describing the darkness light and wind in a descriptive way to help create tension. By the ending of the story there is a big difference in the narrators thoughts and feelings, at the beginning he was very confident, "that it will take a very tangible ghost to frighten me" but slowly as the story went on he become more and more worried and scared about things happening around him, by the end he was frantic with horror, "screamed with all my might". The narrator by the end has now got a more positive view towards the old people, "no longer abstracted" this is because they saved him. ?? ?? ?? ?? 06/06/07 How does H.G wells create Adam heath tension and suspense in the Red Room? ...read more.