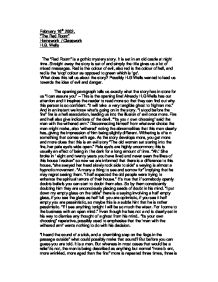 February 16th 2002, "The Red Room" Homework / Classwork H.G. Wells The "Red Room" is a gothic mystery story. It is set in an old castle at night time. Straight away the story is set of and simply the title gives us a lot of mixed messages. Red is the colour of evil, also red is the colour of hell, and red is the 'stop' colour as opposed to green which is 'go'. What does this tell us about the story? Possibly H.G Wells wanted to lead us towards the idea of evil and danger. The opening paragraph tells us exactly what the story has in store for us "I can assure you" - This is the opening line! Already H.G Wells has our attention and it inspires the reader to read more so that they can find out why this person is so confident. "It will take a very tangible ghost to frighten me." And in an instant we know what's going on in the story. "I stood before the fire" fire is a hell association, leading us into the illusion of evil once more. Fire and hell also give indications of the devil. "'Its your own choosing' said the man with the withered arm." Disconnecting himself from whatever choice the man might make, also 'withered' noting the abnormalities that this man clearly has, giving the impression of him being slightly different. ...read more.

Also that the 'red room' is situated a long way from and human contact "Are you really going?" the older man with the shade is asking him "looking at me for the third time with that queer unnatural tilting of the head" everything in this place appears to be unnatural. The realisation that he is actually going starting to sink in to the old people. "This night of all nights" is repeated again, creating the odd sense of mystery and wonder. "It is what I came for" once again very confident in what he is about to do. As the man moves towards the door H.G Wells describes the man with the shade, moving closer to the others. Maybe there is something horrifying in this house if three people who seemingly hate each other are cowering together in front of a fire. "I left the door open until the candle was well alight and then I shut them in." implying that he is the one in charge. The fact that he shuts them in leads us to believe that he want to be away from them. "I walked down the chilly echoey passage" The passage is cold and echoey so there must be a draft coming from somewhere. On the way to the red room the man enter a corridor, "The effect was scarcely what I expected, for the moonlight, coming in by the great window on the grand staircase, picked out everything in vivid black shadow or silvery illumination." ...read more.

Approaching the climax of the stressful night time section of the story, the tension is further emphasised, as the sentences become shorter. Clumsily he knocks his thigh against the table. His downfall begins. From here on he loses control. It is as if he is in sinking sand and the rope stopping him from sinking completely snaps. He loses his quest for the truth as he tries to light the fire with the last candle. Seemingly something or someone knocks him out, you don't actually find out what happened that night and you are left to ponder it all by yourself. There is a space in time, and the tension collapses when we realise it's daytime and somehow that brings a familiar safety. We are informed that he was found at dawn, with blood on his lips, and the old people bandaged his head. The old people who once seemed evil and distorted now appear normal once more, the light brings truth and this is how these people truly are, there abnormalities sinking away as the light shines onto them. The ending of the story is rather open to imagination, nothing is truly resolved and we don't actually know what happened into the room, H.G Wells decided to let us use our imagination seemingly. We do not know what was in that room, or what the 'special' night was, all we know is that people get afraid in that room. ...read more.